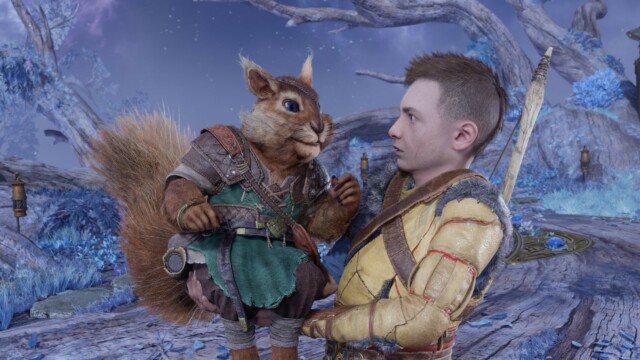 BREAKING through the high expectations players had for it, God of War Ragnarök has blown away fans.

Part of its success is its cast of highly talented voice actors, with long histories in the industry.

Ratatoskr is played by a famous YouTuber.

Sometimes, even if you know an actor, it’s hard to place them by their voice alone.

If you’re wondering who is in the cast of God of War Ragnarök then look no further. We’ve got them all here.

While he is now known as the God of War, Christopher Judge was best known for his role as Teal’c in Stargate SG-1.

He also voices the role of Black Panther in The Avengers video game.

Suljic is a child actor who has appeared in various TV and film roles since 2013.

Despite this, Atreus is still the role he’s best known for.

Fans have particularly taken to Ryan Hurst’s take on Thor in God of War Ragnarök.

He’s a well-established TV actor, best known for his role as Gerry Bertier in Remember the Titans.

Bisutti has worked as a professional TV actor for over 20 years, but has been most praised for her work in God of War.

She was nominated for a BAFTA for her role in the 2018 game.

Acting since the early 1980’s, Craighead has appeared in a number of TV shows, including New Girl and It’s Always Sunny in Philadelphia.

Harrington has worked in games before, and can be seen playing Roy Earle in LA Noire.

You may also recognise him from a number of smaller TV roles, such as Park and Recreations.

An experienced voice actor in the video gaming industry, his first role in game’s goes all the way back to Killer7.

Hayes has worked a lot in children’s TV shows, and you might have heard her in Kung Fu Panda: Paws of Destiny.

She also plays the titular role of Doctor McStuffins in the show.

Working in multiple big budget film roles, Richard Schiff is one of the God of War Ragnarök actors you’re likely to recognise.

He played Dr. Hamilton in Man of Steel, and Eddie Carr in The Lost World: Jurassic Park.

Sundwall is probably best known for her recurring role as Penny in Lost in Space.

Tyr can be difficult to track down, but once you find him you’ll be rewarded by the voice of Ben Prendergast.

Prendergast has had a number of major roles in video games, including Fuse in Apex Legends, and Patroclus in Hades.

Scott Porter is another actor best known for his roles in video games.

He appears as Star-Lord in a number of games, including Marvel Future Revolution, Marvel Ultimate Alliance 3, and Telltale’s Guardians of the Galaxy.

Brett Dalton plays a number of voice roles in Robot Chicken, and also acts in Agents of SHIELD.

You may recognise him from Until Dawn where he plays Michael.

She is best known for playing Karen Page in the DareDevil TV show.

Ally voices a number of characters in video games, including Asav in Uncharted 4, and MODOK in The Avengers.

From film, you may recognise him as the Hook-Handed Man in A Series of Unfortunate Events.

McCreary is actually usually a composer who has worked on a number of famous TV Shows.

The Rings of Power, Godzilla: King of the Monsters, and Battlestar Galactica are just a few of his hits.

Best known for his comedy skits on YouTube under the name ProZD, Cho is also an experienced voice actor.

He has appeared in a number of games including Rune Factory 5, and Lost Judgement.

Written by Dave Aubrey and Georgina Young on behalf of GLHF.

‘Playful’ Prince Harry ‘has vanished’ as he poses ‘awkwardly’ with Meghan Markle at Invictus...

Boris Johnson vows to hike defence spending by billions by 2030 to fight wars...