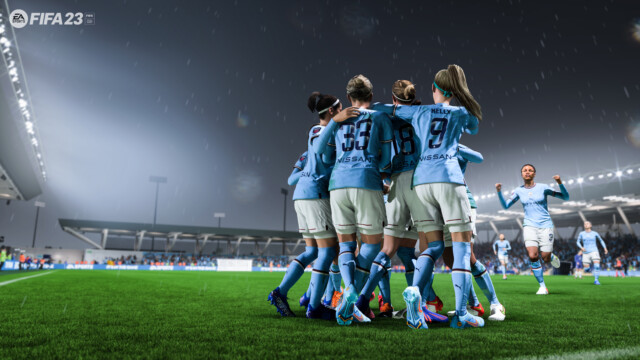 THE final ever FIFA game from EA Sports has just been released, and while it’s more inclusive than ever, you still can’t put a female player on your FIFA Ultimate Team (FUT).

Women’s football is more popular than ever at the moment.

Man City’s Women’s side do the club proud.

This is particularly true in England where the Lionesses finally brought football home, winning 2-1 against Germany in the Euro 2022 finals.

English women are dominating the game at the moment and we have high hopes for them in next year’s World Cup.

However, while you may want Manchester City’s Chloe Kelly or FIFA 23’s cover star, Chelsea’s Sam Kerr on your FUT, it still isn’t possible.

FIFA 23 is the most inclusive FIFA game yet, and has a number of upgrades for women compared to its predecessors.

Sam Kerr is one of two cover stars this year.

This is only the second time a woman has had the honour, since Alex Morgan was on the cover of FIFA 15 as a North American exclusive.

The Women’s World Cup will also be in the game for the first time ever.

It will be updated into the game around the same time as the real event next summer.

More female players have been included in FIFA 23 than ever before, with clubs from the Premier League and Ligue 1 joining the game.

Hypermotion2 has also been used to capture the real animations of female players.

Spain’s Alexia Putellas is the highest-rated player in the game. The first time a woman has taken the title.

With a rating of 92, she outclasses male players like Kylain Mbappé, Kevin De Bruyne, Lionel Messi, and Karim Benzema.

Who can play in FIFA 23’s FIFA Ultimate Team?

There are hundreds of players available to collect and use on your FUT.

Players come with a range of ratings, and can even receive special cards if they are chosen for FIFA’s Team of the Week, or win FIFA’s Player of the Month.

These special cards have even higher ratings than their usual cards, and can be played on the same team as their base card.

Alongside these cards there are also FUT Icons and FUT Heroes.

These are cards from popular but long retired players such as Zinedine Zidane or Pelé.

There are even some iconic players that have since passed away such as Maradona.

Icons and Heroes can be added to your team, and are represented in game by their younger selves.

While female players have ratings in FIFA 23, currently they only apply to Tournament mode.

There are no FUT cards of women players which have additional important stats such as pacing, shooting, and dribbling.

However, there is no reason why EA Sports could not introduce women into FIFA’s most popular mode.

Adding women would by no means be an easy task, but with players such as Putellas, Kerr, Morgan, and Ada Hegerberg all rating in the 90s, they would be hugely beneficial on any FUT.

More high-rated players means better FUTs, which I’m sure is something every player wants.

Perhaps EA Sports is holding off to introduce these phenomenal female players in its upcoming EA Sports FC.

EA has been reached for comment as to why women football players are excluded from FUT but not respond by the time of publication..

Ex-PM Boris Johnson left £400,000 in his mother’s will after she died last year

Harry and Meghan are dreaming if they think theyll have a peaceful life now...