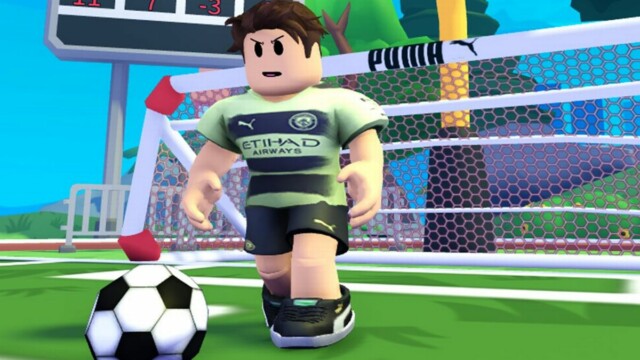 MANCHESTER City has revealed its new kit for this season of the Premier League for the first time via Roblox.

The online metaverse inside Roblox allows players to create their own unique worlds and games.

Roblox players can try out the new kit for themselves.

City uploaded the kit into the game as custom skins, allowing users to see the new kit, and even wear it in the 3D space.

This is the first time that a kit reveal has been made using the platform.

Puma, the kit’s designer, has named the colours ‘Fizzy Light’ and ‘Parisian Night’, and the colours are inspired by the symbol of Manchester, the worker bee.

As spotted by ESPN, the kit has also been shot on real Manchester City players, Laura Coombs, Kalvin Phillips, and Rúben Dias.

The Roblox lobby was also reskinned in the colours of City’s Etihad Stadium as part of the event.

Puma intends to continue promoting the new kit via Roblox.

The brand will host a tournament for Roblox players which will be streamed on YouTube.

A Football Rush tournament will be held, featuring five-a-side matches made up of teams playing against each other inside the game.

Robux is Roblox’s in-game currency. It can be spent on new items, costumes, and sounds for your character.

Roblox recently announced that it would be changing the way that Robux are spent in the game.

Soon, creators will be able to sell the items they design independently instead of being first licensed by and then sold through the company.

Theoretically, this system should be more creator friendly, giving those who design the items a larger share of the profits.

In other metaverse news, VRChat is also hoping to clean up its act.

Mostly used by children, mods have been added into the game which encourage unsavoury activity.

The platform added a new easy anti-cheat update which has removed all mods from the game, much to the disappointment of the community.

Did you miss our previous article…
https://hellofaread.com/technology/two-point-campus-review-magnificent-management/

Fortnite Season 7 Sky Fire finale is a one-time event you won’t want to...

Cutting class sizes in half could slash the effect on R-rate, SAGE documents find

Hundreds of beavers to be released into the wild in England to help combat...