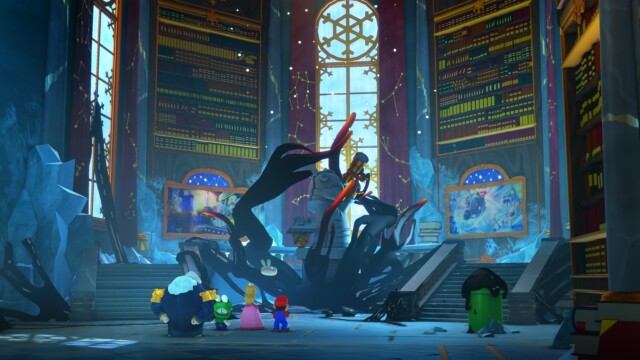 WHEN I was first invited to preview Mario + Rabbids: Sparks of Hope, I gladly accepted but remembered my initial distaste at seeing the first Mario + Rabbids game.

I disliked having my beloved pal Mario hang around with a bunch of raving Rabbids.

Inside a castle in Mario + Rabbids: Sparks of Hope.

Ubisoft’s rabbit-like gremlins aren’t known for their mass appeal, but despite that, they’ve since taken central stage as Ubisoft’s go-to family-friendly cast of characters. Ubisoft’s Minions, if you will.

As a result, they’re the only characters from Ubisoft’s recent portfolio that can realistically hang out in the Mushroom Kingdom. But you don’t want people thinking it’s too childish, so throw in some guns too.

The first Mario + Rabbids is a solid XCOM-like – a turn-based strategy game – and even the most stone-hearted Rabbid haters can’t deny that.

Classic Mario moves like the jump are turned into a hostile attack, and familiar items are now used for a one-up in battle.

Mario + Rabbids: Sparks of Hope looks to take this all a step further, giving us an expanded and improved version of the battle system, with a much bigger and more involved world to explore.

The overworld is the biggest change you’ll immediately notice.

In the original game, the overworld amounted to a linear path with some admittedly very nice scenery lurking tantalisingly in the background.

In this game, you will instead be able to properly explore worlds and environments, which gives you a sense of place.

It feels as if Mario and his Rabbid pals are exploring an actual world, rather than selecting encounters from a world map.

All of this elevates it above your average XCOM-like, making it feel a bit closer to a traditional Mario RPG, such as Mario & Luigi or Paper Mario, while still having that classic turn-based gun combat.

Of course, having proper dungeons is only a benefit if they’re fun to play through.

One particular ice castle has a series of doors that operate like Zelda’s infamous Lost Woods: go through the wrong door, and you’ll be returned to the start.

Helpfully, used doors are left ajar to indicate you’ve already tried that path, but the Lost Woods in Ocarina of Time is made fun thanks to music cues pointing you through, not trial-and-error.

While exploring your dungeons you’ll have to pay closer attention to the health of your team. It’s not easy to revive allies mid-combat, so you’ll need to ensure you’re all well-rested before an encounter.

You can spend coins in exchange for health, and then the amount of coins you’re earning from each battle – and spending at shops – becomes another thing to consider.

Boss battles can even become long, multi-phase affairs with no change to rest between each, at which point health items and healing abilities become as precious as gold dust.

This means that Mario + Rabbids: Sparks of Hope is still a challenging game.

It’s absolutely more robust than the original, and even has DLC plans to include Rayman in the future – at long last.

Saying all that, those who had issues with the original game shouldn’t expect to have all of their problems solved here.

This is bigger and better than before, but isn’t likely to win over any new fans.

Written by Dave Aubrey on behalf of GLHF.

Luigi on a beach with Rabbid Mario in Mario + Rabbids: Sparks of Hope.

Britain’s heroes in Covid fight will be hailed on National Thank You Day on...

Meghan Markle ‘left employee shaking with fear and nothing was ever good enough, royal...

Naughty Boy threatens to quit AGAIN as I’m A Celebrity star is mocked by...