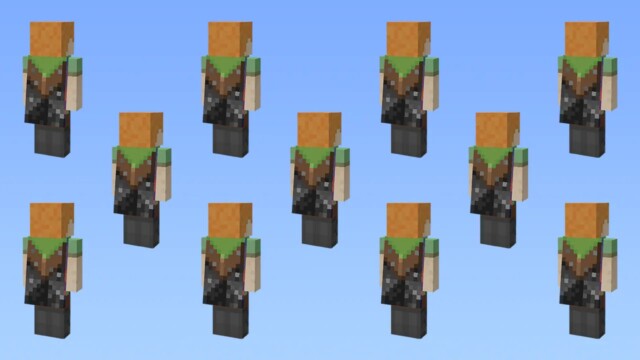 UNLIKE Old School Runescape there aren’t many wearable items in Minecraft to show how adept you are at the game.

There is one thing which will help you stand out in the crowd, though, and that’s capes.

The Vanilla cape is the latest addition to capes in Minecraft.

While modders have added capes in and sold them on the Marketplace, legitimate capes are hard to come by, with Mojang giving out fewer every year.

Here’s a history of Minecraft’s capes, and the few that you still have the chance to pick up yourself.

These are one of the greatest status symbols in the game, and mark you out as a Mojang employee to players.

It changes with the company logo, keeping the branding fresh.

You can pick up your own one of these, but it might not be worth the years spent on the computer science degree.

Between 2011 and 2016, a cape was given out to all those who attended Minecraft’s signature convention, Minecon.

There was a different one given out every year, meaning there are six Minecon capes out there currently.

When Minecon went digital only in 2017, Mojang stopped giving out capes, though one was released in 2019 to those who owned the Bedrock edition.

Technically, this cape is still available to purchase on the Marketplace but it doesn’t come cheap.

It will set you back around 10million Minecoins which is around £48k/$63k in real money.

Minecraft is the best-selling game of all time and has sold over 240million copies worldwide and across numerous platforms.

However, back in 2011 Mojang was just happy to reach the one million mark.

Minecraft hit this goal on January 13, 2011 and user akronman1 was given a special cape as the millionth customer.

People are unsure whether akronman1 is still playing as they haven’t been seen online in a while.

However, it is estimated to be one of the most valuable accounts in Minecraft if they ever put it up for sale.

Mojang has often rewarded members of the community who have stood out or helped with the game in some way.

Notch, the original creator of the game, was notorious for giving out personalised capes to anyone whose work he admired.

Some of these capes were taken away from users as players started demanding their own capes.

However, some still remain. Here’s a list of who got one and why they received it.

Part of the reason that Minecraft became so huge is because it is played all around the globe.

The undertaking to translate Minecraft into 119 languages is no small task, and most of those who have helped out received the Translator cape.

Caller’s Bane is another game from Mojang, though it obviously wasn’t anywhere near as popular.

Originally called Scrolls, this collectible card game came out in 2014, and was promoted via Minecraft with the Scrolls champion cape.

This cape was given to anyone who placed first in Scrolls’ weekly charts five times. It was also a prize for the Scrolls tournament at Minecon 2015.

Despite receiving positive reviews, Cobalt is another Mojang game which was eclipsed by Minecraft’s success.

This cape was given out as part of a Cobalt level making competition and for winners of 2016’s Cobalt tournament.

The most interesting thing about this cape is that it’s one of the only capes to be significantly altered in its Elytra form.

While we’re not sure where Mojira comes from, this cape was given to the moderators of the Minecraft Bug Tracker.

With the size of the game, it’s no surprise that there are a lot of bugs, in particular the Bedrock Edition.

This team had a lot of work on their hands and were deserving of the reward.

These capes were given out as an incentive to encourage more people to make maps for Minecraft Realms.

Those who received a total of at least eight points would get this cape in return.

This is one of the capes which is still up for grabs if you play Minecraft on PC.

If you purchased the game before December 1, 2020, you can receive your cape by migrating your legacy account to a Microsoft one.

When you do that, check your in-game options and your cape should be there.

Another one of the available capes, the Vanilla cape was revealed by Mojang in a blog post, but was deleted less than an hour later.

Despite an earlier than planned announcement, the Vanilla cape is real, and available to anyone who bought both the Java Edition and Bedrock Edition on PC before June 6, 2022.

This is when the launchers merged and two became one.

The catch is that if you received one of the versions for free, it doesn’t count. You have to have made two separate purchases.

How is your furlough pay calculated and can your employer backdate it?

Prince William gives sweet nod to the Queen as he reveals how his family...