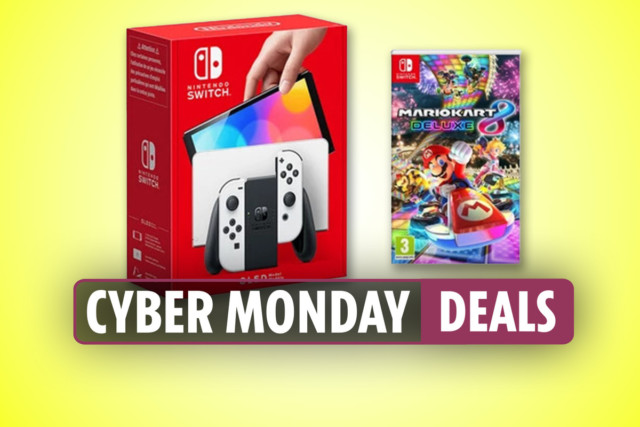 BLACK Friday has been and gone – but don’t despair if you’re hunting for Nintendo Switch deals.

There are still plenty of great offers out there, including some surprising deals for the Nintendo Switch OLED too.

*If you click on a link in this piece, we may earn affiliate revenue.

Switch OLED stock has been very scarce over the last few months or so, with very few retailers having Nintendo’s latest console available to buy.

That’s why almost all of the Nintendo Switch Black Friday deals we saw last week were on the original, first-generation device.

But then over the weekend we spotted this nice little deal at Very, offering the Nintendo Switch OLED and Mario Kart out together in a bundle for £339.98 – that’s at £10 less than usual.

Which is no massive saving, but we’re happy to see the OLED model of the Switch out there in the deals listings regardless.

On top of the, the white model of the standalone console is available again.

One caveat though: you’ll have to pre-order both these items, and waiting until December 16 before they ship to you.

That might disappoint gamers who want to get their hands on it sooner rather than later – but for anybody who wants to buy the OLED console as a Christmas gift, this will be a welcome relief.

Currys is also offering a couple of Switch OLED bundles too.

And against a backdrop of troubling stock issues across the board, this is nothing but good news.

A global shortage of internal parts has meant all sorts of electronic products have been hard to come by, including the PS5 and Xbox Series X.

If we were to make a prediction, it’s that various stores have been holding back Nintendo Switch OLED stock for the period between Black Friday and Christmas.

But that doesn’t mean you should assume there’ll be consoles available by the truckload in the weeks to come – if you’re interesting in picking up the OLED this side of Christmas, we suggest you strike fast.

Looking for a new TV to hook your console to? Don’t miss our pick of the best Black Friday TV deals.

For a wider range of offers, head to our Black Friday gaming deals page.

And for more discounts on other electronics and gadgets, there’s our Black Friday tech deals page.

Love Island reunion viewers outraged as Marcel says he ‘drifted’ from Gabby when he...

Why is Emmerdale not on ITV tonight and when is it back on?

Emmerdale spoilers – Fans in shock as soap reveals ANOTHER murder for Meena; plus...