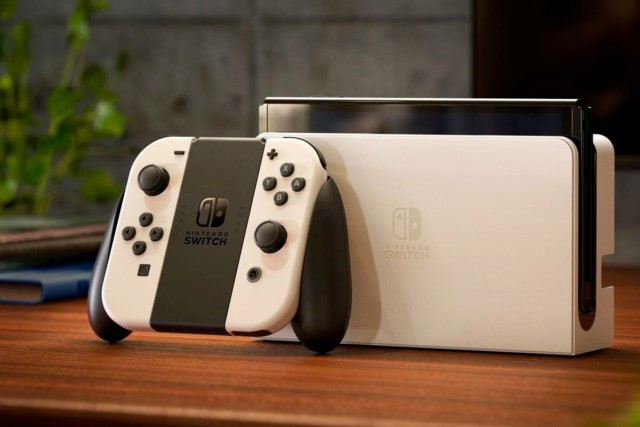 GAMERS got their first look at Nintendo’s new console yesterday – and they aren’t happy.

Hoards of fans have taken to social media to berate the gaming giant for overlooking a key feature during the Nintendo Switch OLED’s development.

The Nintendo Switch OLED is overpriced. Imagine paying $50 less than a PS5 for a console with:
No 4K support for HDTV
720p screen
No 60fps
No DLSS
Only 64GB of storage pic.twitter.com/2brmTMc2UC

Specifically, fans are fuming that the $350/£309 console won’t offer 4K resolution when it hits shelves around the globe in October.

Instead, the Switch OLED will max out at a lower 1080p resolution when plugged into a TV set.

It means top games will look blurrier and more pixelated on Nintendo’s machine than when played on rival consoles.

The only way im buying that no 4k Nintendo switch OLED is if it came with Animal Crossing New Horizons 2 preinstalled.

Here's a graph from @nintendolife comparing all the Nintendo Switch models. (OLED included)

– No 4K
– No Bluetooth headphones

Not worth the upgrade in my opinion. pic.twitter.com/qYJG0oq56B Nintendo unveiled the OLED in a blog post on Tuesday, and it’s largely the same as the original two-in-one Switch console released in 2017.

Like its predecessor, it can be plugged into a television at home or played in handheld mode when you’re out and about.

As the name suggests, the new machine boasts a 7-inch OLED screen with up to 720p resolution.

I'm pretty bummed with the Nintendo switch news. I've been holding out for a Pro and updated system but really? A screen change is it? No Bluetooth audio support, no 4k docked mode?!

Good thing I still have my Nintendo Switch. You can keep that New Switch with the OLED screen with no 4K HD Support, I'll keep the old one.

The new Nintendo switch got no 4k resolution !????

OLED is a new type of screen technology that most TVs haven’t even got yet – but is increasingly common on high-end tellies and smartphones.

When docked to a TV, you’ll get a higher resolution of up to 1080p resolution with 60 frames-per-second, Nintendo said.

While it offers some major improvements on the original Switch, fans were quick to point out that the console’s specs are modest compared to rivals.

One Twitter user fumed: “The Nintendo Switch OLED is overpriced.

omg the new nintendo switch is literally just a new model with a better screen. literally no other enhancements or performance boosts. no 4K support. kinda lame announcement actually.

#NintendoSwitch news is really disappointing. No 4k or speed boosts

Since there’s no 4K on Nintendo Switch OLED, what’s even the point?

Another said: “I’m pretty bummed with the Nintendo switch news. I’ve been holding out for a Pro and updated system but really? A screen change is it? No Bluetooth audio support, no 4k docked mode?!”

Others highlighted that for just $50 more, you could bag yourself a PS5 or Xbox Series X with a higher resolution and frame rate.

“I can’t believe that on this day in the year of our Lord 2021, Nintendo thought it was ok to announce a 720p OLED display Switch,” one person tweeted. “This is the epitome of not reading the room. 50 dollars more you can have yourself a PS5*/Xbox”.

However, it wasn’t all negative. Some Twitter fans jumped to the Switch’s defence, pointing out that it still holds it own on account of its ability to switch between being a handheld and a traditional console.

“Until you can hold your XBox or PS5 system in your hands and play it, I don’t want to hear any lip about how the #NintendoSwitch OLED doesn’t do 4K,” one person posted.

The Switch OLED – the third iteration of the Switch – is set for release on October 8.

If you already have a Switch, you’ll be able to transfer your games and save data to the new console, Nintendo said.

Microsoft will sell Xbox Series X on ‘subscription model’ for £25 a month with...