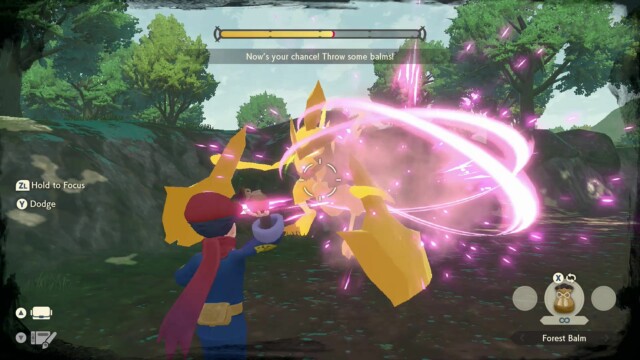 It’s been a while since the game’s release, but some people are still stuck on the late game content.

There are some tough battles in Legends: Arceus.

In particular, one fight near the end – if you’ve played it you know the one – ramps up the difficulty, and many people struggle to get past it.

However, there is a really simple trick which will help you conquer this battle, and any others you have struggled with, without grinding for levels.

Before we get to that, we have to talk about the core of all Pokémon games, and that is maths.

Buckle up, and get ready for a learning adventure.

What are Pokémon IVs and EVs?

In the mainline Pokémon games, how strong a Pokémon is, is decided by two secret stats.

The first are the Pokémon’s IVs. These are values assigned to Pokémon when they hatch, or are encountered, and they can’t be changed.

If you’ve ever noticed that some wild Pokémon are stronger than others, even though they are the same level, this hidden value is why.

It can range from zero to 31 for each stat, giving a large difference in strength between each ‘mon.

EVs are similar, but they are more like bonus points which you give Pokémon by deciding who you battle.

If you battle fast Pokémon you get a little speed boost, tanky Pokémon will give you a defence boost, and so on.

Those expensive vitamins you can purchase give you extra EVs. That’s how you gain a little boost in stats.

To show you what all this means in nice easy numbers, let’s use an example.

If we take one of the starter Pokémon for Husui, Typhlosion, we can see it’s a Special Attacker with powerful moves such as Flamethrower and Shadow Ball.

Imagine our Typhlosion is level 100. It was unfortunately born with zero IVs and we never fought another Special Attacking Pokémon.

However, if we caught a beefy Cyndaquil with 31 IVs and only fought Special Attackers with it, this stat would now be 317.

That’s a 42% increase, meaning every Flamethrower you use with your chad ‘mon will do 42% more damage than your weak one.

How do IVs and EVs work in Pokémon Legends: Arceus?

IVs and EVs were replaced in Legends: Arceus when they rethought the whole battle system.

Don’t worry, not only is the new system much easier to understand, it is also a whole lot easier to control.

Instead of these secret stats it’s been replaced with Effort Levels.

Some Pokémon come with a few Effort Levels already, but the majority you have to increase yourself.

If we take the example of our weak and strong level 100 neutral natured Typhlosion again, the weak one would have 278 Special Attack compared to 387 Special Attack.

That’s still a 39% increase in power just by topping up their Effort Levels.

How do I increase my Pokémon’s Effort Levels in Legends:Arceus?

Pokémon’s Effort Levels increase when they are given Grit.

You will need a lot of this in order to superpower your Pokémon.

You use Dust from Effort Levels zero to three, Gravel from four to six, Pebbles from seven to nine, and Rocks to reach level ten

These can be given to you in exchange for completing requests, can be found in rocks in the overworld, and you can trade ten smaller types of Grit for one bigger one with the nice muscular lady who trains you.

The easiest way to get Grit though is by releasing Pokémon from your Pastures back into the wild.

Every time a Pokémon leaves, they reward you with a small amount of Grit for your mercy, and the stronger the Pokémon, the bigger the Grit.

Pump these bad boys into your main team and you will see challenging fights suddenly become a breeze.

Even easier if you use the X button you can mass release Pokémon, rewarding you with large amounts of Grit in a matter of seconds.

So if you’re struggling to take down Cythnia’s evil Great-Great-Grandpa, give this simple trick a try.
Written by Georgina Young on behalf of GLHF.

Did you miss our previous article…
https://hellofaread.com/technology/genshin-impact-3-0-all-available-characters-in-banners/