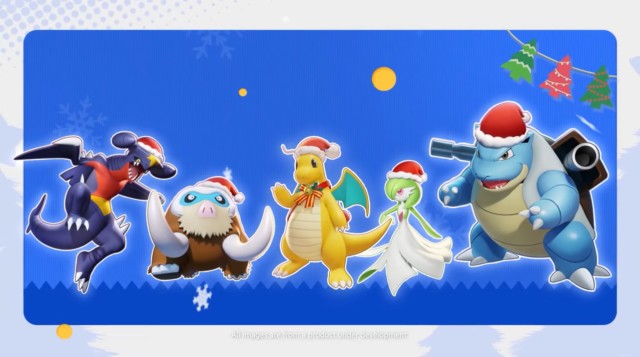 POKEMON Unite players are in for some festive new content, and here’s when it all unlocks.

The events and content are rolling out on staggered schedule throughout December and will run into January.

Here’s a brief overview of dates, with a more in-depth rundown below:

First up in the slew of seasonal Pokemon Unite goodies is Tsareena, who is joining the roster on Thursday, December 9.

Heralded as a solid all-rounder, Tsareena should open up new strategies for you with moves like Trop Kick, Triple Axel, Grassy Glide, and Queen Ascendant.

You can get Tsareena for free thanks to the free Unite license for the pokemon that’ll be available until Friday, December 31.

All you have to do to get the Unite license to unlock Tsareena is log in to the game and check your in-game mail.

Dragonite is coming to Pokemon Unite later in the month on Monday, December 20.

We’ve been teased a sneak peek at the pokemon in action before they drop, as well as more details on how to unlock them.

We don’t know if Dragonite will be a freebie like Tsareena or if you’ll need to a license.

The blog post simply says that the Unite license for Dragonite will be available on the given date.

Quick battles are getting a festive spin between Wednesday, December 15 and Sunday, January 16.

KO’d pokemon will turn into snowmen in the 4-on-4 battle map, during which time they won’t be able to move.

They can still provide tactical info, as well as spreading holiday cheer each turn.

Their basic attack in snowman form will result in the frozen pokemon jumping into the air.

The rest of its moves will result in it striking differernt poses like cheering, waving, or giving a thumbs-up.

As an added bonus, if you manage to defeat Delibird while on the Shivre City map, you’ll be rewarded with a gift box.

Meanwhile, the wild Avalugg in the central area will be replaced with Articuno two minutes into matches.

The Pokemon Unite Illumination Challenge starts on Wednesday, December 15 and runs up until Sunday, January 16.

Collect lights through daily missions and challenges to unlock decorative items and bonuses.

Just select the holiday tree in the lobby to start competing. Lights are capped at 100 per day for missions, and 750 per day for challenges.

One of the items waiting to be unlocked is a one-day limited license for Alolan Ninetales, new trainer fashion items, and various holiday-themed decorations.

The collected snowflakes are used to reveal parts of a hidden photo — reveal it in full to earn rewards.

What time does the Warzone Pacific map release and Vanguard Season One detailed.

Halo Infinite fans furious about being locked out of game in surprise delay.

Fortnite skins Chapter 3 Season 1: All the characters you can unlock in the Battle Pass.

Businesses may not get £1,000 job retention bonus for furloughed workers