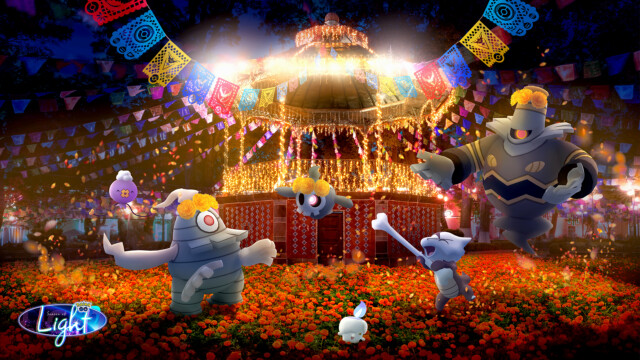 HALLOWEEN may be over, but ghosts aren’t leaving Pokémon Go as the mobile game starts to celebrate the Day of the Dead.

Día de los Muertos is a special celebration in Mexico, to remember family and ancestors who have passed on.

Ghosts continue to rule in Go.

It also marks the start of a new month, which means big changes are coming.

You can find out everything that’s going on from October 31 to November 6 in our Pokémon Go guide.

Pokémon Go’s Day of the Dead event begins on Tuesday, November 1, 2022, starting at 10am local time.

This will be a two-day event that will feature costumed Pokémon from the Duskull line.

On these two days Duskull, Duskclops, and Dusknoir can all be found in the wild wearing a cempasúchil crown of orange flowers.

There will also be double candy during this time, and a special challenge featuring Alolan Marowak.

Giratina in its Origin Forme will return to raid hour this week, when it will be available in all gyms.

It will also appear randomly in raids until November 8, and it can be found in shiny colours.

Unfortunately, the day after you catch Giratina, it will return to its Altered Forme, but it will come with the move Shadow Force.

Great League is finally leaving Go Battle League and will be replaced by the 2.5k CP limited Ultra League.

Halloween Cup will also be leaving and replaced by the Willpower Cup.

The Willpower Cup only allows Fighting, Psychic and Dark types to enter with a maximum CP of 1.5k.

Gardevoir is also excluded from the cup, though we’re not sure why.

Community will take place on Saturday, November 5, 2022, from 2pm to 5pm local time.

In addition to the regular Community Day, Dratini will be returning as a classic comeback.

Dratini will appear more often in the wild, and has an increased chance of being shiny.

Dragonair that are evolved into Dragonite during Community Day will also learn the special move Draco Meteor.

Miltank is the target of Go Battle Day

If you use Miltank in your team in Go Battle League on Sunday, you will receive four times the amount of Stardust per win.

You can also compete in 20 battle sets instead of the usual five.

Between 11am and 2pm if you win a Pokémon encounter in the Battle League it is guaranteed to be Miltank.

It will also have an increased chance of being Shiny during this time.

Did you miss our previous article…
https://hellofaread.com/technology/xbox-game-pass-the-best-games-released-in-2022/

Strictly stars Fleur East and Molly Rainford look incredible in their bikinis as they...

British military ready as minister vows to ‘protect our partners’ in face of Russian...

Boris Johnson vows to take Britain on a tech and green revolution in the...