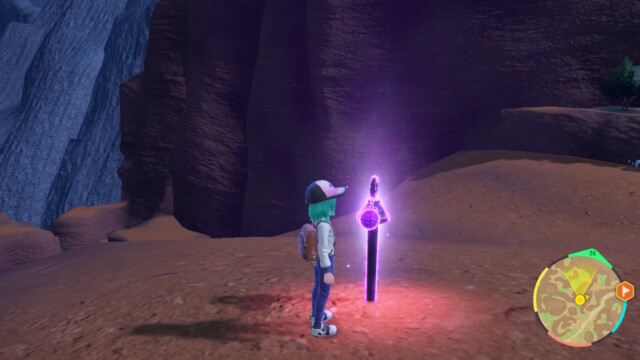 THE Treasures of Ruin are a new legendary quartet hidden deep in the post-game of Pokémon Scarlet and Violet.

They are incredibly powerful beasts and all come with a dual Dark-typing.

These are the stakes you’re looking for.

To unlock each one, you must find eight stakes and then travel to the vault they live in.

If you want to catch the Treasures of Ruin in Pokémon Scarlet and Violet, keep reading to find out how.

Wo-Chien is the Dark/Grass-type legendary with the special ability Tablets of Ruin.

In the mesa area directly east of Mesagoza, the first stake is on top of the rocks just off the main path.

The second stake is on a grassy outcrop directly north of the mesa biome.

The third stake is on a cliff overlooking Artazon, just southwest of the town.

On a cliff next to the floodgate southeast of Mesagoza, you’ll find the fourth stake.

On top of a spiral grassy hill southeast of Mesagoza is the fifth one.

The sixth stake is on a cliff behind some trees northeast of Los Platos.

By a lake on top of a hill directly south of Los Platos is the seventh stake.

The last stake is on top of a cliff by the coast in the southeast corner of the map, just above the purple vault.

Purple Vault – Where to find Wo-Chien

Wo-Chien’s vault is at the bottom of a cliff by the coast in the southeast corner of the map. Just below a purple stake.

Chien-Pao is the Dark/Ice-type legendary Pokémon with the special ability Sword of Ruin.

The first stake is behind the Pokémon gym building in Cascarrafa, east of the waterfall.

The second is on a cliff overlooking the nearby Dark-type Team Star Base on the south side.

At the bottom of a cliff in a little nook northwest of the Pokémon League is the third stake.

The fourth stake is on a rocky plinth in the middle of a sinkhole south of the nearby river.

On a mountainside ledge northwest of Cortondo is the fifth stake.

In a cave that can be entered from either a beach on the western coast or the southwest corner of Cortondo’s region,

On top of a grassy slope overlooking Cortondo from the southwest is the seventh stake.

The last stake is halfway down a cliff near the south coast, next to a waterfall.

Yellow Vault – Where to find Chien-Pao

On a cliffside on the west coast, due west of the Bombirdier titan fight, is where you can find Chien-Pao.

Ting-Lu is the Dark/Ground-type legendary with the special ability Vessel of Ruin.

On the southeast side of a small island in the south of Casseroya Lake, you’ll find the first stake.

The second stake is on the east side of a large island in the middle of Casseroya Lake.

On a cliff on the southwest border of Casseroya Lake, is the third stake.

On a snowy cliffside on the north coast, just east of the Socarrat Trail, is the fifth stake.

The sixth is on a small grassy patch just south of the river that’s south of Casseroya Lake.

On a rocky plinth in the large cave south of Casseroya Lake, is the seventh stake.

The last is on a grassy cliffside by the river northeast of Medali.

Green Vault – Where to find Ting-Lu

On the south side of the Socarrat Trail’s rocky hill, right in the center, you can find the home of Ting-Lu.

Chi-Yu is the Dark/Fire-type legendary with the special ability Beads of Ruin.

On the northeast coast near a raised tree and rock, is the first stake.

The second is on a cliff overlooking the forest with painted trees on the north side.

On top of a big rocky pillar in the grassy area on the northeast coast, is the third stake.

The fourth is on a grassy cliffside in the northeast corner of the bamboo forest.

On a grassy patch at the top of the waterfall on the south side of the bamboo forest, is the fifth stake.

The sixth is in the ruins at the bottom of the giant cliffs that border Paldea in the northeast.

On a grassy cliffside on the south side of Glaseado Mountain, is the seventh stake.

The final stake is on the east coast, south of the badlands area, and northeast of Levincia.

Blue Vault – Where to find Chi-Yu

In a cave at the top of the waterfall on the south side of the bamboo forest, is where you can find Chi-Yu.

How to WIN free groceries for a year plus £1000 cash with Sun Savers...

Mike Tindall is competing in I’m A Celeb for cash after work dried up...

When does X Factor The Band start, who are the judges and what happened...