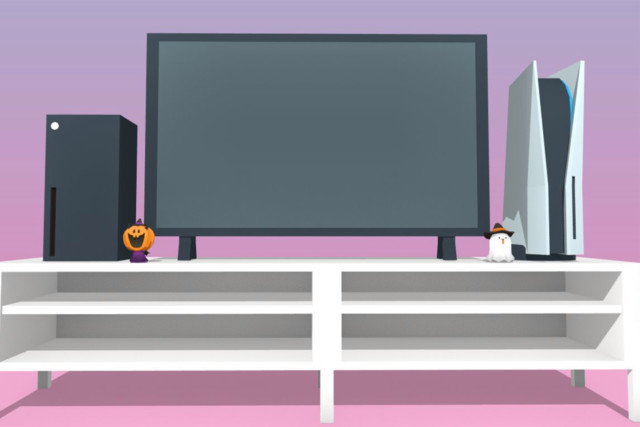 THE new Xbox and PlayStation consoles are mere weeks away, opening up a bold new world of next-gen games to players across the globe.

But how big are the new machines, and will they fit in (or on) your TV unit at home? We reveal all below.

How big is the PlayStation 5? Dimensions explained

Sony’s PlayStation 5 (PS5) is a big ol’ beast, and is more than likely the largest games console you’ve ever heard of.

That means the machine towers over any previous PlayStation or Xbox over, and is head and shoulders above the upcoming Xbox Series X.

Twitter user @Keisawada mocked up some artist impressions last week that hint how a PS5 might fit on someone’s TV unit. Sony’s PS5 console will hit shelves in time for Christmas

Stood vertically, the white machine would need to sit next to your telly – or off the unit altogether – to have any chance of fitting into your setiup.

Laid vertically, the PS5 will likely struggle to fit in smaller TV units.

However, it’s safe to assume that most people ordering the console will own a large TV (50in or above) and by necessity also a roomy unit.

For those who don’t: A cheaper version of the console called the PS5 Digital Edition is a bit thinner as it lacks a disc tray.

How big is the Xbox Series X? Dimensions explained The Xbox Series X was unveiled back in 2019 and sports an unusual, boxy design.

It initially wasn’t clear whether the monolith-like machine could be used horizontally as well as vertically, though Microsoft later confirmed this.

That means the console is massive compared to its predecessor, the Xbox One X (30cm x 24cm x 6cm).

It’s also nearly three times as heavy, although as far as size goes it’s still a way off the towering PS5.

Like the new PlayStation, the Series X has a smaller, cheaper version coming out later this year dubbed the Xbox Series S.

That has lower specs and lacks a disc tray, allowing Microsoft to make it a fair bit smaller than its chunkier sibling. The Xbox Series S (left) and Series X side by side

Like the new PlayStations, the Series X and S will have to be placed alongside your telly or TV unit if placed vertically.

Stored horizontally, the Series S should easily slip into most TV units, while smaller units will struggle to fit the Series X.

That’s because it’s exceptionally tall when laid on its side – make sure to measure your unit’s shelves before making a purchase.

When are the consoles out and how much will they cost?

The PS5 release date has been set for November 12, but not everywhere.

That date only stands for the US, Japan, Canada, Mexico, Australia, New Zealand and South Korea.

In the UK, you won’t be able to get it until November 19.

So how does that compare to the PS5’s biggest rival, the Xbox?

Microsoft’s pair of next-gen consoles will be out a little earlier, landing on November 10.

The new consoles mark the start of a new generation of video gaming at home.

These super-charged machines will be capable of rendering stunning gaming graphics at resolutions up to 8K.

And a slew of blockbuster games will be released in the coming months and years, powered by the impressive consoles.

In other news, Sony recently confirmed that more PS5 pre-orders are on the way.

The next-gen machine sold out within minutes when pre-orders launched on September 17.

And, a PlayStation fan has created an “all black” PS5 that disappointed gamers think looks much better than the real thing.

EastEnders star Maisie Smith ‘reveals’ her Strictly partner – but covers his face in...

Warm Home Discount scheme reopens – here’s how to get £140 off your energy...

Boris Johnson says he ‘absolutely’ has confidence in Raab despite Crete holiday – so...

Meghan Markle makes cryptic dig at Royal family and says she and Harry were...