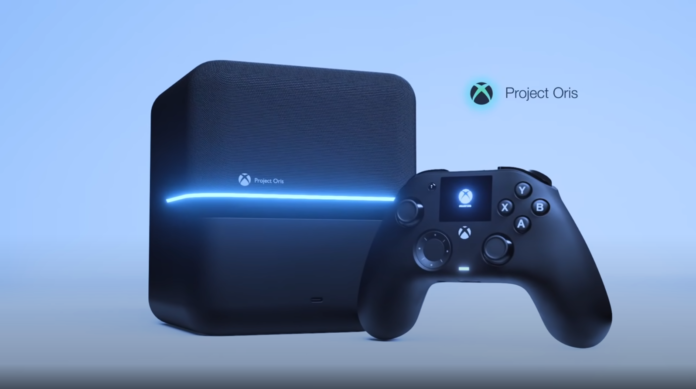 A GENIUS gamer has drawn up plans for the ultimate Xbox console – and it can beam your favourite games onto your living room wall.

Dubbed “Project Osiris”, the fantasy gaming machine comes with its own built-in 8K projector to give you an unbeatable playing experience.

It also comes with an Alexa-style smart assistant that can start up your games, eject a disc or even turn off your lights in response to voice commands.

A video showcasing the imagined console was posted to YouTube by 3D artist Joseph Dumary.

Micrsosoft already has a feature-packed new console in the works: The Xbox Series X, which is out later this year.

Joseph’s YouTube clip doesn’t have a lot to do with that, however, and is more a look at what the ultimate Xbox console would look like. Osiris comes with its own built-in 8K projector As well as the machine itself, the video showcases a slightly different take on the class Xbox controller.

It’s made of recycled materials and comes with a small touch screen, a bit like the PS4 controller.

The controller charges wirelessly using a port on the console itself, and even has a fingerprint sensor that lets you access your profile and customise your settings.

The console’s AI assistant can “turn off the light, make a reminder, eject a CD, send a message to a friend, watch a movie on Netflix, change channels on TV and play your favorite playlist on spotify,” Joseph wrote in the YouTube video’s description. The controller is made from recycled materials

In addition, the console has a tool that lets it track how stressed you are while you play by reading the pressure your hands exert on the controller.

The machine can then adjust the difficulty of the game accordingly. On Fifa, for instance, your passes will be less accurate and your shots will be more difficult.

Of course, Microsoft is developing no such console (as far as we’re aware), and Joseph’s video is just a bit of fun.

We’ll likely know more about the US firm’s plans for its actual new Xbox, the Series X, in the coming months. The new Xbox Series X is out later this year

Microsoft confirmed last year that the Series X would be out in time for Christmas 2020.

It will be up against stiff competition – Sony will release its PlayStation 5 console around the same time.

In other news, earlier today a PlayStation fan released stunning concept images of the PS5.

Gamers across the globe can now play Google Stadia for free.

Do you plan on bagging one of the new consoles at launch? Let us know in the comments! We quit our jobs to pursue our easy side hustle full time – over...

Ugg boots are back so here are bargains so you can get the look...