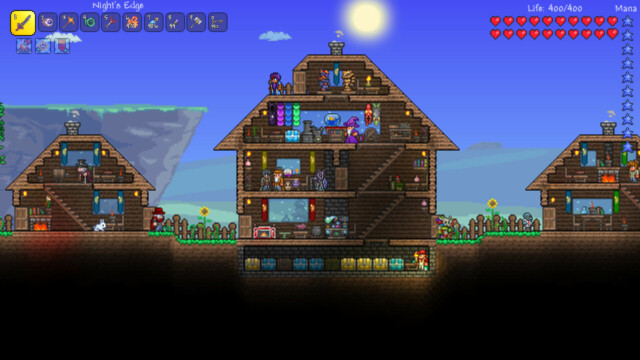 SURVIVAL games are often a mixed bag, but these ones are the very best.

The genre has become somewhat oversaturated in recent years thanks to YouTuber’s obsession with them.

These survival games will keep you playing for hours once you dive in.

It took off in a major way in the 2010s, and seemingly every indie developer on the planet wanted to have a go.

This means there are plenty of cheap and terrible survival/crafting games out there for you to try.

However, every now and then a shining beacon emerges from the rubble, a truly great survival game that has unique ideas and competent mechanics.

It can often be hard to pick out these gems amongst all the rubbish, so we’re here to tell you the very best survival games on all platforms.

Whether you own a PlayStation, Xbox, Switch, or PC, you’ll be able to play these games to your heart’s content.

This War of Mine

We’re starting off with something pretty downbeat, but it’s the perfect example of the amazing stories the survival genre can tell.

Many survival games will have you start with very little, but slowly grow to have an abundance of everything you need. Not This War of Mine, though.

This game sees you surviving in a war-torn world, and it’s your responsibility to go out and scavenge for the things you need to keep everyone alive.

Resources are always scarce, and it forces you to make some extremely heavy moral choices to stay alive.

Your objective is right there in the title, and it’s certainly a job easier said than done.

Don’t Starve has an overwhelming sense of style. The weird and wonderful world you get thrown into doesn’t make any sense, and it won’t get any better as you sink into insanity.

It’s an extremely punishing game, but the world is so engaging that you want to keep diving deeper. You can even do so with friends now in Don’t Starve Together.

You’d be amazed how even the most bog-standard games can be turned into something special by adding dinosaurs.

The survival mechanics in Ark are fun, but they’re nothing particularly special on their own.

However, when you add the ability to fight, tame, and ride dinosaurs, all of that mediocrity falls by the wayside.

Alongside DayZ, Minecraft is responsible for the explosion in popularity the survival genre saw.

Although many may see it more as a building game, the survival mechanics are still extremely robust.

Plus, with recent updates adding things like The Warden, an almost unkillable monster that stalks you in the deepest caves, it’s more challenging to stay alive than ever before.

You’ve probably already tried at least once, but you can’t have a list like this without mentioning it.

Most survival games have you exploring the world around you to gather resources and build an empire. So what do you do when there is no world to explore?

In Raft you start floating in the middle of the ocean on a tiny raft, and you have to gather drifting resources to survive.

Eventually, you’ll be able to find land, but you won’t be able to stay for long. It’s a unique feeling as you grow your floating home.

This isn’t a survival game in the traditional sense. Rather than directly controlling a character that roams the world, you play the game more like a city builder.

It’s your job to keep as many people alive as possible in a frozen village as post-apocalyptic conditions slowly plummet the global temperature.

It’s an extremely difficult game to master, and you’ll be faced with tough choices like whether or not to enact child labour to keep things running smoothly.

Rimworld is another game where you take more of a management role as you control your little band of survivors.

You’ll soon learn the true meaning of the term ‘hostile terrain’ as you have to contend with wild animals, raiders, natural disasters, and so much more as you build your base.

It’s a deceptively deep game that keeps track of all your survivors’ mental and physical conditions as they inevitably start to deteriorate.

Something a little less punishing (unless you feel like playing on Master Mode), Terraria is more about exploration and adventure.

While on the surface it may seem like a 2D Minecraft game, it’s actually a very deep RPG experience.

There may not be any grand quests or plot, but you progress from boss to boss, unlocking new resources to upgrade your gear, and unlock new areas of the world to explore along the way.

Plus, it’ll run great on even the most low-spec laptops.

If you like DayZ, but you don’t really care for the zombies or military elements, then Rust is the perfect place for you.

While the community can be a little toxic at times, if you get in with the right servers on Rust, you can have some of the most fulfilling multiplayer experiences available in gaming.

You can band together and build huge bases, go out and raid other players, or wait for enemies to come from all corners of the world to try and take you down.

Even the very best games in the survival genre lack a certain level of polish, but not Subnautica.

You’d easily mistake this for a triple-A release with just how beautiful it looks, and there’s a lot of substance behind all that style.

The underwater setting makes it immediately stand out amongst the crowd, but it goes (quite literally) so much deeper than it first appears, and you’ll always be finding new areas to explore.

In a genre with so much garbage, Subnautica shows the absolute pinnacle of what can be done with a unique idea and a competent team.

Sir Keir Starmer will drastically cut his conference speech to be make it less...