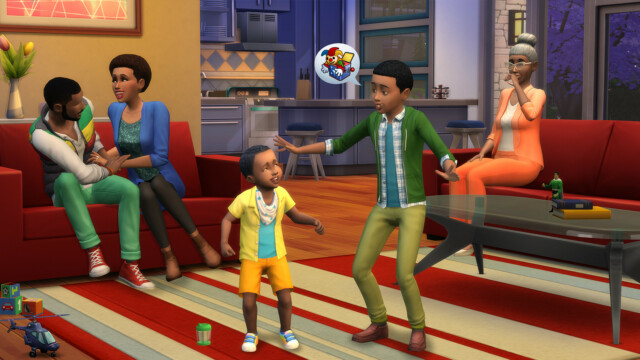 GAMES have had a controversial past, and all around the world law-makers have questioned if they should be legal.

Whether it’s Mortal Kombat’s gruesome fatalities, or Night Trap’s saucy lingerie, judges have questioned if the public should play these games.

Find out where and why The Sims was banned.

However, there are some games which seem so harmless it’s hard to understand why they were banned in the first place.

Here is our list of the 10 video games which were banned for the strangest reasons.

South Park is known for its controversial sense of humour, and there is plenty of that in its RPG.

While South Park: The Stick of Truth was released in Australia, there was a catch.

One of the more controversial scenes was censored, and instead was replaced with a picture of a crying koala.

Somehow the matter of fact description of the censored scene which replaced it was somehow even funnier than the original.

The Wolfenstein series has always had plenty of violence but that wasn’t the reason it was banned in Germany.

It was initially blocked from release because of the series bad guys: the Nazis.

Germans aren’t afraid of being portrayed as the antagonists, but Nazi imagery such as swastikas are forbidden.

The games were eventually released but Hitler is missing his moustache, and the swastikas are now triangles.

Fallout 3 isn’t any more violent than your average action game, but gore isn’t the reason it wasn’t released in India.

While not banned by the government, Microsoft decided not to release the game due to one of the in-game animals.

Brahmin is the name of Fallout 3’s mutant two-headed cattle, which could offend the cow loving people of India.

The name is also the name of a Hindu caste, and naming a type of cow as such could be a controversial topic.

The first two high school based murder mystery games came out in South Korea so people were confused when the third was banned.

The series is known for being low on gore, using neon pink blood and a cartoonish art style.

However, shortly before the game was due to be released a teenage girl was found guilty of murdering and dismembering another child in her apartment complex.

Not wanting to remind the public of the crime, officials banned the release due to similarities in the murders.

Games are rarely banned in the United Kingdom, and despite the raunchy title Sex Vixens From Space was no different.

However, in 1989 when the game was being shipped over for sale the cargo was seized.

Customs took all copies of the game as they entered through the port and had them destroyed in order to “protect the youth of today”.

Despite no official ban taking place, the British public were unable to get their hands on a copy.

While some countries have banned Pokémon Go for weaknesses in the game’s security, that’s not why it was forbidden in Malaysia.

The official reason for the ban was that the game was “promoting the search for power”.

It seems the people in Malaysia aren’t allowed to try to be the very best that no-one ever was.

The ban was repealed after a backlash on social media and improvements to the software security.

It is extremely rare that a first party Nintendo game gets banned with the company’s family friendly image.

However, Belgium’s strict laws meant that Mario Kart Tour was never released there.

Belgium disallows gambling in any form, and in 2018 it was the first country to include loot boxes under this definition.

This means the majority of free-to-play games are banned, or the stores are altered to remove chance from its purchases.

The Sims seems so innocuous it’s hard to imagine why any country would want it banned.

Uzbekistan did just that when it banned a large number of games including The Sims claiming they are “used to propagate violence, pornography, threaten security and social and political stability”.

The public were very critical of the new law which banned 34 video games in 2017.

It was said that the government was focusing on superficial issues instead of larger societal problems.

The second Crash Bandicoot game was released in Japan but one of the animations was removed before release.

The animation where Crash is squashed and he is seen walking around as just a head and feet was changed to just a flat body.

This is because in 1997 a child was beheaded by another with their head left outside the school for people to find.

Since then Japan has refrained from showing any form of decapitations in the media.

When people think of games with comforting vibes, Animal Crossing is usually one of the first that comes to mind.

However, it was banned in China due to the ability for players to visit each other’s islands.

It is claimed that people were writing anti-government messages on their islands by placing plants or creating custom clothing patterns.

As others could visit and read these messages, it was no longer allowed in the country.

EastEnders spoilers: Key character to be KILLED OFF amid Walford cast ‘cull’; plus Coronation...

Davina McCall looks incredible at 54 as she shows off rock-hard abs dancing in...