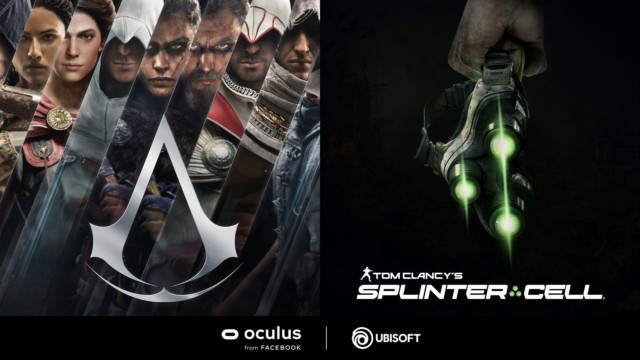 TWO of gaming’s biggest franchises may be getting virtual reality releases in the near future.

Canadian developer Ubisoft is working on VR versions of Splinter Cell and Assassin’s Creed, according to jobs listings posted to its website.

Ubisoft has begun hiring for its Assassin’s Creed and Splinter Cell VR titles, which were announced by Facebook-owned VR firm Oculus last year

They appear to confirm the existence of games first revealed at the Facebook Connect 2020 showcase.

Headset-maker Oculus announced during the show that Assassin’s Creed VR and Splinter Cell VR were in development for its devices.

The games are confirmed for launch on Facebook-owned Oculus

As many as 17 roles have been listed for Splinter Cell VR, according to PocketLint.

At one point “Network Programmer” was listed as one of the roles, VR news site Upload VR reported.

It would therefore appear that Ubisoft is not only well into the creation of Splinter Cell VR but is crafting a multiplayer mode for it, too. The last Splinter Cell game dropped back in 2013

As far as the games themselves, there’s little else to go on.

Somewhat unsurprisingly the job descriptions don’t go into detail on gameplay or a release date.

It’s also unclear if Ubisoft is building the games specifically for VR, or will also release them on consoles and PC.

What we do know is that the experimental titles will be compatible with headsets built by Oculus, which is owned by Facebook.

To play them, you’ll need one of those (the gadgets start at around £300) on top of a high-end PC.

As far as a possible release date goes, it’s possible the games will launch alongside a new Oculus device to help boost sales of the headset.

Facebook is rumoured to be working on a new version of the Oculus Quest for release in 2022.

Despite impressing with its clever gameplay, many fans complained that, due to the equipment required, the game was simply too expensive to play.

The last Splinter Cell game came out way back in 2013 and fans have been begging Ubisoft for a new entry to the action stealth franchise ever since.

Splinter Cell: Backlist was hampered by poor sales but Ubisoft has repeatedly insisted that another game is in the works.

Are you excited for Ubisoft’s new games? Let us know in the comments!