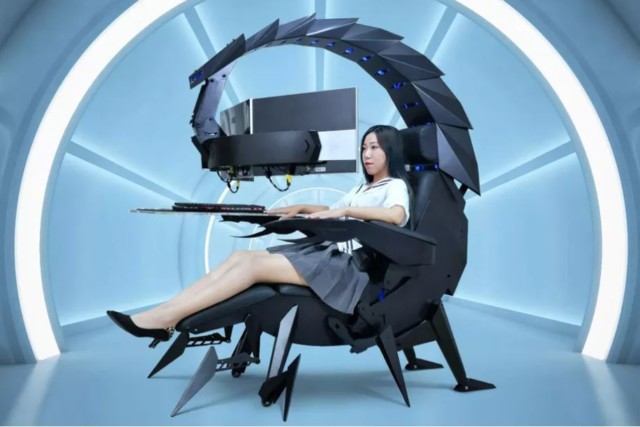 Developed by US firm Cluvens, the Scorpion Computer Cockpit is made of “high-carbon steel” and measures nearly five and a half feet (1.6m) long.

This scorpion-shaped chair is apparently the ultimate gaming rig

It supports up to three 27″ monitors that you can plug into your favourite gaming PC, and features a heated seat that you can recline.

Users can shift the motorised cockpit “with the touch of a button transforms into whatever you need it to be,” according to Cluvens.

Writing on its website, the company says the “villainous” scorpion’s tail extends to become the overhang support for screen mount.

It can support between one and three monitors that dangle from above while you game. You can recline the motorised seat using a remote

Users lie down on the arachnid’s body, which has some cool additional features.

“The chair comes with a massage and heating function so you can enjoy some quality time while you’re making yourself look like the ultimate villain,” Cluvens says.

The legs act as… the legs, while the claws act as a stand for the mouse and keyboard, and store a remote that controls the chair’s position.

Those pincers may appear sharp, but they’re rounded at the edges to stop gamers from hurting themselves. The machine is decorated with blue LED lights “You don’t have to worry about getting cut by the corners,” Cluvens assures potential customers.

You can only get the rig in black, and orders take a few weeks to arrive, according to Cluvens. What are your thoughts on the “scorpion” chair? Let us know in the comments!

Did you miss our previous article…
https://www.hellofaread.com/technology/fortnite-superstar-ninja-is-back-on-twitch-after-quitting-for-failed-microsoft-app-in-30million-feud/

Doctors MUST return to seeing patients in person to save lives, Boris Johnson says

Full list of school closures as Brits told to stay at home in sizzling...