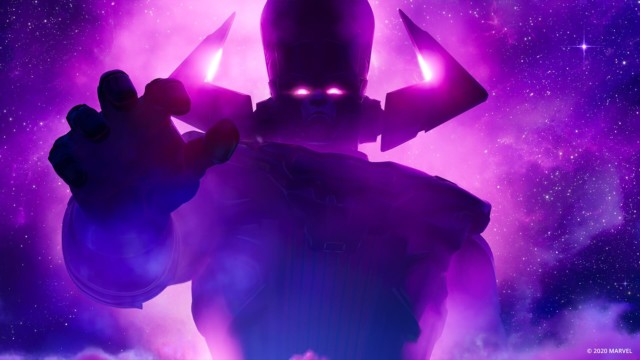 FORTNIRE players are gearing up for a major in-game event tonight – the arrival of Galactus.

The Destroyer of Worlds will descend on Fortnite Island to wreak havoc, and only you can stop him. Well…you and millions of other players.

Galactus is coming to Fortnite – and it won’t be pretty…

Fortnite Galactus event – what is it?

Galactus is one of Fortnite’s biggest baddies.

Also known as the Destroyer of Worlds, Galactus is hell-bent on causing mayhem – giving off serious Thanos (of Marvel fame) vibes.

That’s no surprise: Galactus is also a Marvel character.

Once a mortal man, Galactus is now a cosmic entity who consumes planets – and some argue he’s even stronger than Thanos.

“It was only a matter of time,” said Epic Games.

“Galactus is closing in on the Island and the fate of all Reality lies in the balance.

“Join the ultimate fight against Galactus in the one-time only Nexus War finale event.”

Epic Games says “everything is in the balance”, and it’s likely that long-lasting changes will be made to Fortnite based on the outcome of the battle.

Most of the details of the event are being kept secret however, so players will certainly be in for some serious surprises.

But you can probably expect some Marvel heroes to turn up in-game. Some say Galactus is even stronger than fellow Marvel baddie Thanos

Fortnite Galactus event date and start time – when is it?

The event begins on December 1 at 4pm New York time.

That means you’ll be playing at 1pm on the west coast of the USA, and 9pm in the UK.

To get involved, you’ll need to make sure you’ve downloaded the 14.60 update.

It’s available to download today on all devices except for iPhone.

Epic Games recommends logging in at least 60 minutes prior to the event beginning.

And the event playlist will go live 30 minutes before the start time.

In other news, check out our review of the iPhone 12 Mini.

FIFA 23 has announced its highest rated player — and it’s not Mbappé, Messi or Benzema