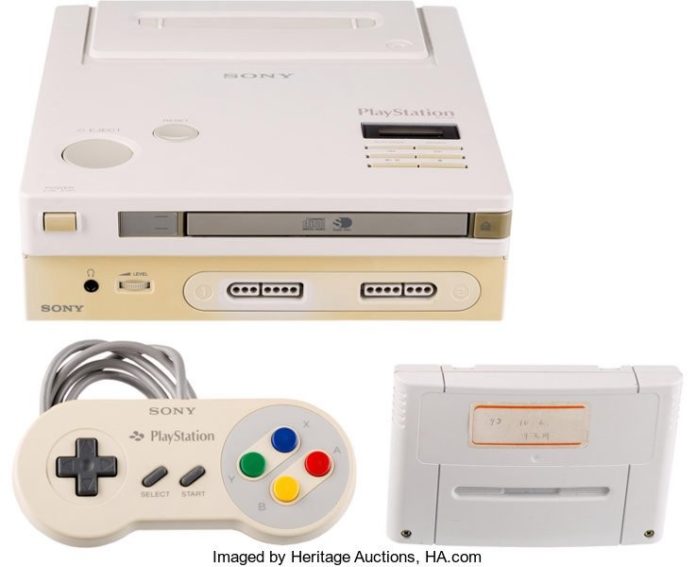 AN UNRELEASED “Nintendo PlayStation” console is now up for auction and is expected to sell for millions.

Created nearly 30 years, the “world’s rarest console” is capable of playing both cartridges and discs.

Plans to flog the console at auction were first revealed in December, but it’s now been officially listed at Heritage Auctions.

It was officially a Nintendo console, but was stamped with Sony branding and was dubbed the ‘Play Station’.

But the project was scrapped before release, and the two Japanese tech giants went on to release their own ‘next-gen’ consoles separately.

In 2009, a man named Terry Diebold unwittingly bought the prototype as part of a lot of abandoned property from a former Sony executive, according to a Kotaku report.

The device was rediscovered by Diebold’s son in the family attic in 2015, attracting huge interest from the gaming industry.

Ever since, Diebold and his son have been touring the “Nintendo PlayStation” around conventions.

But Diebold is tired of spending his own money showing it off and wants to finally realise the console’s value.

“I’ve put a lot of work into this by travelling with it and we have made nothing on it.

“Every trip that we…have taken with it has cost us money out of pocket.”

The device is set to be sold at Heritage Auctions, where it is expected to sell for millions.

“We turned down $1.2million from someone in Norway,” Diebold revealed.

But experts are struggling to pin an exact price tag on the console.

“It’s definitely going to sell, and the market will determine the value,” said Valarie McLeckie, of Heritage Auctions, speaking to Kotaku.

“In the case of this particular item, since it’s never been sold at public auction before, there’s really no way to tell.”

The auction has now begun with no reserve price.

This particular unit is believed to be the only one not destroyed, and may have been owned by the founder, first president and CEO of Sony Computer Entertainment.

One would be a CD-ROM add-on for the SNES, and the other would be a Sony console that could play both cartridges and discs.

But the deal eventually fell through, and Sony switched to developing its own console.

This was the PlayStation, which was first released in Japan on December 3, 1994.

And Nintendo then released its own Nintendo 64 which still used cartridges in June 1996.

The idea of combining multiple consoles into one is still inspiring gamers everywhere.

Earlier this year, gadget geeks created the ultimate mega-console with an Xbox, PS4, Nintendo Switch and gaming PC inside.

A recent PS5 “leak” gave us an early look at the console and controller ahead of its 2020 release.

And find out why both the PS5 and the Xbox X Series could be the last consoles you ever own.

How much would you pay for a Nintendo PlayStation? Let us know in the comments!

When is the first Love Island 2020 elimination?

I’m a single mum-of-two with cancer and rising costs mean I have to work...

PSVR 2: PS5 is getting virtual reality headset with NEW controller for ‘ultimate gaming...

Ring in the New Year for less with bargain ways to celebrate the end...