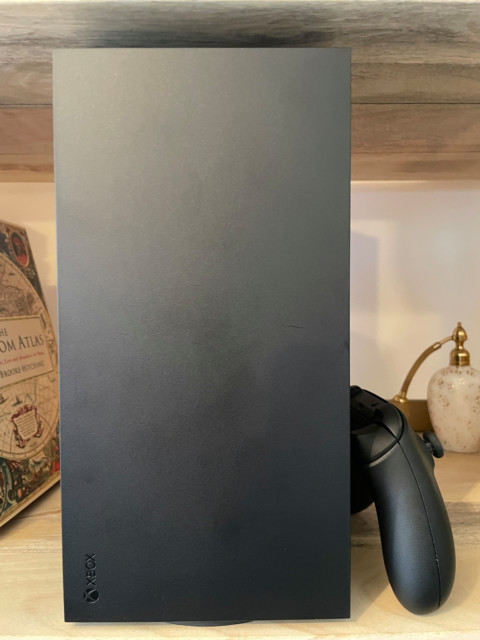 MICROSOFT is back with a brand new gaming box – the Xbox Series X.

I’ve been testing the next-gen games console that makes your own Xbox looks like a snoozefest, but should it be on your Christmas list this year? Almost definitely.

Meet the Xbox Series X, which could be the console of your dreams

What is the Xbox Series X?

It’s one of a pair, coming in as the more powerful and pricier alternative to the Xbox Series S.

This is Microsoft’s direct rival to the PlayStation 5, promising high frame-rate 4K gaming and gorgeous graphics. It looks like a matte black tower dedicated built to worship the gaming gods – but not in a garish way.

In fact, it’s very minimalist and should look fine in any living room.

It didn’t fit in my Ikea cabinet standing up, so I lay it down on the side – an option for those with limited space.

I prefer the overall look to the previous generation of consoles.

And I think it’s probably a safer design versus the PlayStation 5, which will certainly stick out more in your front room.

The Xbox Series X is also much, much smaller than the PS5. That’s a big win for Xbox.

The controller is best described as “don’t fix what’s not broken”.

It’s largely the same as the old joypad but with a few tweaks – including a more grippy texture.

The joypad is more comfortable to hold and there’s now a Share button too, but there’s not much new beyond that.

PlayStation arguably has the edge here with its new DualSense controller, which has adjustable tension in the triggers to boost immersion, as well as a built-in speaker. The green-tinted fan grill is a pleasant design touch

It’s a shame Microsoft didn’t bundle any brilliant additional tricks into the joypad, but it’s not a bad controller by any means.

And it’s certainly a safer design that the DualSense joypad, if that’s your thing.

Xbox set-up is fast: HDMI into the telly, connect to WiFi and you’re done in minutes.

Downloading games and installing massive patches is still a problem, but by no means exclusive to Xbox.

On paper, both the Xbox Series X and PS5 are extremely powerful.

They use 8-core processors, although the Xbox is clocked slightly higher.

And it offers 12 teraflops of graphical output – that’s 12 trillion operations per second.

It trumps the 10.3 teraflops in the PS5, though that probably isn’t (and shouldn’t!) be the deciding factor for you.

What’s important is that Microsoft offers 4K gaming at up to 120 frames per second.

It’s an impressive feat, and will require a 4K telly on your part – though they come relatively cheaply these days.

A highlight of the new generation of consoles is ray-tracing, which features in many new games being released. The console can stand vertically, or lie on its side

Graphical engines accurately map how light and shadows reflect, making them infinitely more realistic than ever before.

It requires a lot of processing power, but it’s a major boost to visuals – and the new Xbox is tough enough to handle this graphical revolution.

Other neat perks include generally faster loading, as well as Quick Resume, which lets you instantly hop back into (and between) games seamlessly.

It works well, and largely replaces the need to manually “save” – because games are effectively suspended in memory.

That’s thanks to a sizeable 1TB solid state drive that works quickly, and will be able to hold plenty of games before forcing you to delete your least favourite children, so to speak.

I should note that even standard non-optimised games will look better on the new Xbox Series X, as it uses Auto HDR to improve colour and contrast on games that were designed for standard-def. I took this screengrab early on in Dirt 5, because it really shows the quality of textures and lighting – and the density of detail

The roster of new games available before launch on the Xbox Series X is limited, but I’ve been able to try most of the best of what’s currently on offer.

That includes an optimised version of 2018 racer Forza Horizon 4, which is absolutely stunning.

The popular game lets you whizz around a squashed version of Britain’s north in hyper-cars, and it’s jaw-dropping on the Series X.

I had the game running on a 65-inch 4K Sony telly, and many parts of the environment looked photorealistic.

The frame rates were fine, as you’d expect given the powerhouse hardware on board.

Even the tiny droplets of water that trickle across the car’s hood are expertly rendered.

I also got to spend some time in Dirt 5 – it’s a rally racer that’s beautiful like Forza, but far dirtier. There’s a disc tray and a USB port on the front, but not much else

At start-up, you get the choice of prioritising for graphical quality or for frame rate.

I went for graphics first, and found frame rate largely stable. There were a few noticeable drops near the beginning of races, when 12 cars were jostling for position – and for screen-space.

But these were hardly noticeable, and not worth switching to other graphical setting in my opinion.

Classic games have received optimisations too, including Gears 5 and Ori and the Will of the Wisps.

I’ve never had much love for the Gears franchise, but I’ll concede that it looks fantastic on the Xbox Series X.

But that’s no surprise: it looked great anyway.

Ori is probably the more interesting case, because it’s one of the few games I tried that doesn’t have a realistic art style.

It’s more challenging for games that are cartoonish to show off impressive graphical techniques.

But Ori is stunning on the Xbox Series X, with colourful and intense visuals – and pretty lighting effects.

The game is stable and runs very fluidly, and makes a great case for a more animated aesthetic. A big part of your buying decision should lie in the games available for Xbox – and how they compare to the PlayStation.

It’s fair to say the PS5’s roster of games is extremely impressive, but the Xbox fares well too.

The blockbuster Xbox title is Halo Infinite, which sees the return of beloved Master Chief.

Sadly the game will miss launch – and won’t actually land until 2021, which is a grave shame for Xbox. There are plenty of games to enjoy including a new Forza Motorsport, Yakuza: Like a Dragon and Dirt 5.

Sadly, I’m not hugely staggered by the next-gen launch games on offer.

Many of the best Xbox titles – including the impressive Watch Dogs: Legion – are also coming to PS5.

And the PS5 arguably has more tempting exclusives, including Spider-Man and Horizon.

But it’s hard to say no to the prospect of a new Halo game – and you may feel the same way. Xbox Series X review verdict – should you buy it?

Is the Xbox Series X any good? Yes, definitely.

For the price, it’s offers astonishingly good graphical performance – and it looks good too.

The games on offer are decent enough, and that roster will grow enormously in the years to come.

It’s also less important to buy the same console as your mates, given that online cross-play is so common now.

But the Xbox Series X doesn’t live in a vacuum, and it’s competing against more gaming platforms than ever before.

In terms of PC gaming, the Series X can’t compete with top-end machines. I’ve got a Dell Alienware R10 that dominates the Series X.

But you’ll find it near-impossible to build or buy a PC with anywhere near the graphical output of a Series X for £449.

Is it better than the PS4? Honestly, the raw specs aren’t even important – because games will look largely the same on both consoles.

What’s probably more important it supports the games you want to play, and even if you think the console physically looks good as an ornament in your home.

You might also find joy in sticking with Xbox if you already own loads of Xbox games – and have amassed achievements and online pals there.

It’s also worth considering other alternatives for Christmas, given that these consoles will probably be available in cheaper bundles next year.

The Oculus Quest 2 is a cracking VR headset that’s cheaper, and the joyful Nintendo Switch also costs much less.

And you could even invest in a cloud-based system like the Google Stadia and save a bit of cash too.

But if you’re set on a next-gen flagship console, the Xbox Series X won’t disappoint – and it’ll only get better with time.

HOAR says: Microsoft’s Xbox Series X is powerful, attractive and brimming with gaming potential – though it’s probably not a must-buy just yet. 4.5