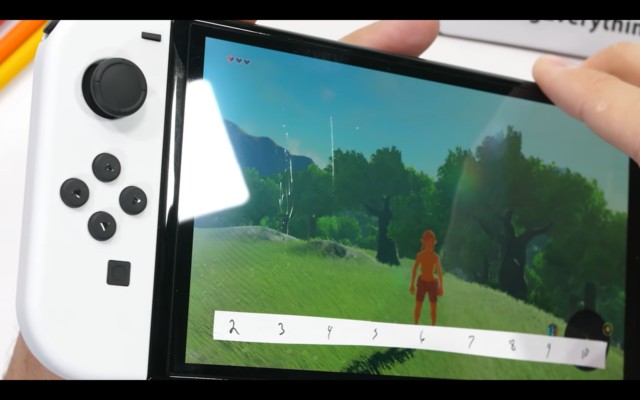 IF YOU’VE treated yourself to a brand new Nintendo Switch, there’s an urgent warning you need to be aware of.

It turns out that the Nintendo Switch OLED display isn’t as durable as you’d think – and you should take steps to protect it now.

Nintendo Switch OLED screen is too easily scratched for glass

JerryRigEverything (via VGC) has uploaded a video brutalising the new console, and has made a shocking discovery.

The upgraded hardware offers a number of improvements over the original Nintendo Switch, including a glass display.

As such, it should be a lot more durable than the all-plastic panel on the launch model.

But the video shows a screen durability if just 2/10 using the Mohs scale of hardness.

Essentially, the numbers on the scale refer to how resistant to scratches and scuffs a smooth surface is.

As Zack Nelson points out in the video, levels two or three would be plastic, and levels five or six would be glass.

After getting to work on the Nintendo Switch OLED‘s display, the results were surprising.

“Which means this new OLED screen has a surface level of plastic,” Nelson concludes.

As with any ‘soft’ plastic screen, you’ll want to avoid stashing it away with keys, coins, or anything else that might leave a mark.

But what happened to the glass screen? It’s lying underneath the plastic film which acts as an “anti-scattering adhesive layer”.

So if you drop your new Switch and shatter the screen, the glass shards won’t explode everywhere – similar to how the windshield of a car works.

You can buy glass screen protectors, as Nelson shows off in the video, if you prefer the feel over plastic.

Other components have also been upgraded, like the kickstand.

Not only is it wider and ore robust, but it’s made of metal, not plastic.

You can watch the video for a full rundown, if you can stomach seeing the console getting torn up. RIP.

Here’s where you can buy Nintendo Switch OLED in UK and US.

GTA: The Trilogy – The Definitive Edition pre-orders, release date, and what you need to know

Win Call of Duty: Vanguard on PlayStation, Xbox or PC – we have 20 download codes to give away, plus merch!