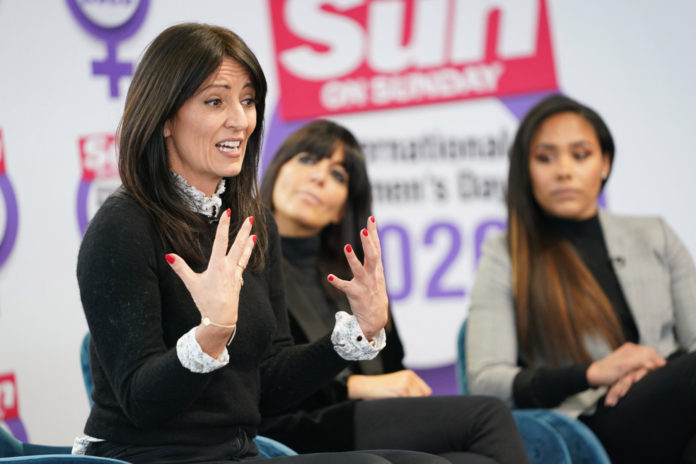 DAVINA McCall has revealed she was rushed to hospital in her 20s after a drugs overdose.

The star spoke about the “terrifying” moment for the first time at the launch of The Sun on Sunday’s International Women’s Day event.

The former Big Brother host, 52, addressed 130 inner-city schoolgirls as she warned against the perils of drugs.

She said: “Drugs took me to a very, very, very dark place and, one night, I overdosed.

“It was very frightening as it was a very gradual overdose. I’d had a cocktail of drugs, because I didn’t want to feel normal.

“I was constantly trying to escape myself — I was like a piece of fruit rotting from the inside.

“So then I thought, ‘Well, I’ll just take a valium’, and the next thing I knew I woke up in hospital. At my lowest point, when I was filled with self hatred, it was literally a case of ‘get clean, or die’.”

After her overdose, Davina began to attend Narcotics Anonymous meetings and quit drugs for good within a year.

She still occasionally attends meetings, as well as the odd therapy session “if I feel like a top-up”.

The presenter was described as inspirational by pupils and teachers at News UK’s London HQ last week. One teacher said: “Some of the girls are dealing with or had to deal with addiction problems at home.

“Their worlds can feel isolating so knowing they’re not alone and you can come through it has been huge for them to hear today. It was inspirational.”

Claudia also revealed she had been in therapy for anxiety. Davina told the girls that getting clean turned her life around.

She said: “I was the person that people would have crossed the street to avoid. I started with cannabis and went on to become a heroin addict.

An inspirational Davina spoke candidly about her drug abuse

“It ended up taking me to the darkest, darkest place. I empowered myself to change my situation, I made a conscious decision I could change me. And because I got clean I got the job I’d dreamed of and that changed my life forever.”

Davina admitted her childhood was complicated. After her parents split she spent time with her alcoholic mother and began partying at just 13.

Of her mum, Florence, she said: “She spent most of my childhood either being the most fun person in the room or the most embarrassing.

“One memory of her was her wearing an electric blue coat, which was fake fur down to her ankles and she was naked underneath and she was walking down the street flashing people.

Davina admitted her childhood was complicated

“I was younger than all of you girls… 11 and 12 and just dying. She was my mother… someone you are supposed to be able to turn to, but she wasn’t there for me.”

As her addiction took hold she knew she was spiralling closer to death. She said: “I hated myself so much. I was so full of self-loathing. I was telling myself constantly that I wasn’t worth anything.”

But her best friend, her Dad and stepmum helped her see sense. She said of Narcotics Anonymous: “When I went to these meetings I thought, ‘It’s get clean or die’.

“In any situation that I go into now, I use the lessons I learned at those meetings

Speaking frankly about her addiction,  Davina said she needed to stop as she was spiralling closer to death

“I learned how to work hard… at first on my recovery but later I took with me lessons I’d learned and channelled them into my work.

“And here I am talking to people and you might want to learn something from what I’ve said.”

While initially her search for fame was to fill the absence of a mother’s love, she now uses it as a force for good.

She said: “I thought fame was going to fix the hole in my soul, in my heart. And it didn’t. So I did lots of work on myself.

Davina opened up about her self-loathing and hating herself

“I want people to know I got 37 letters of rejection from TV companies. I kept them all. And they are all employing me now – all the people who turned me down.

“If I could, I’d give my younger self a great big cuddle… a really uncomfortably long one, and assure me that it’s all going to be OK.”

She revealed she had therapy for the first time last year and discovered she was battling anxiety.

It follows what she describes as a “weird time”.

She revealed: “I needed help with something very specific. I was waking up at 4am ridden with worry.

“The woman I saw was amazing, and talking really helped. It was almost magical.”

While she was an angst-ridden teen who teachers initially wrote off, she learned to treat failure as a lesson, the greatest being: “Dust yourself off and try again.”

Claudia, 48, said: “Davina, Alex and I have had a gazillion setbacks — but the truth is failure is good.

“I don’t like the idea of perfection and the idea that there’s an easy way. There isn’t.

“The thing about breaking the mould is it won’t go easy as pie.

“I hope you do get As at A-level, I hope you go to a brilliant university, I hope you fall into a wonderful job, four years later you fall madly in love and have twins who sleep through the night.

“But that isn’t life. So, good luck with that one.

“And they will bolster you up and then you can dust yourself off and just try again. I worked my ass off. I was a geek.”

She also urged the girls to block the internet trolls.

She said: “I quite like social media but just a little bit — like Tabasco. I wouldn’t say who, but somebody who is much more famous than us did get trolled and she replied back: “You just made me feel bad.”

“And this person replied back saying, ‘Oh God I’m so sorry, I’m 15, I’m in my basement, I haven’t seen my dad, I feel miserable, somebody was going to get it, it just happened to be you’. They are a superstar and I thought, ‘How did they get affected like that?’

“My favourite bit of advice that anybody ever gave about social media was from Boy George who said, ‘Block and roll baby’. Block everyone. Mute them. They are morons and robots. So girls, block and roll — balls to them!”

The London schoolgirls said the talk had spurred them on

Alex insisted it was vital for women to support each other — for 365 days of the year, not just one.

She said: “There’s room for all of us to shine and that’s the empowering thing. It’s about learning from those who have gone before. If we look back in history, without extraordinary women we wouldn’t be doing some of the things we are today. So it’s for us and you in this time to make sure we keep pushing those boundaries forward… it’s one big celebration.”

Swanlea School teacher Ilene Byrne said: “It was so inspiring to hear the stories of women with such varying experience that ultimately showed the importance of women supporting each other.”

Swanlea pupil Alesha Habibah Siddiqa, 14, added: “They showed us not everyone has an easy road to what they want to achieve in life.”

St Augustine’s Tasnim Jammal, 16, said: “The panel were so open and honest, their message was so inspiring about accepting yourself and being true to who you are.”

Aaliyah Martin, 15, of The John Roan School, added: “It has definitely spurred us on to try to achieve bigger and better things. We want to be the next generation of girls to break the mould.”

Why wont the Liberal Democrats appear on ITVs debate tonight?