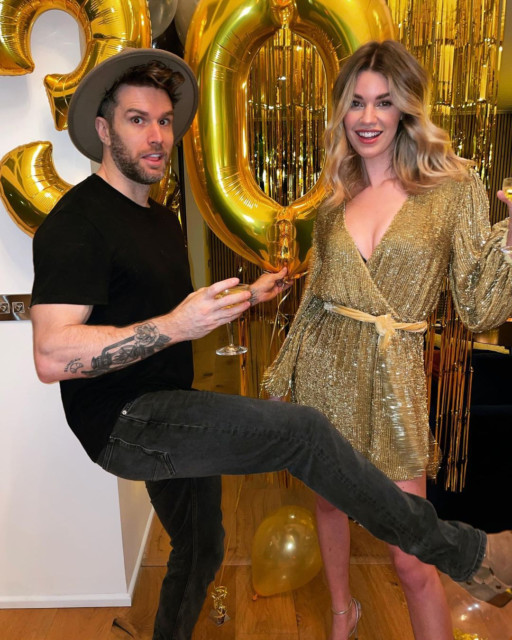 Joel will likely have earned HUGE brownie points after transforming part of the pair’s pad into a “party zone” complete with gold streamers hanging from the walls.

Huge balloons spelling out 30 were positioned on the wooden flooring of the lounge, and surrounded by star inflatables, for the intimate bash dictated by the UK’s coronavirus national lockdown.

Showing his sweet side, Joel also chose to buy a balloon stating “Love You”, which he positioned next to a huge childhood image of Hannah.

She was also treated to a huge pile of presents adorning their kitchen table, as well as a bright bunch of flowers positioned on their dining table.

Perhaps her most impressive gift, though, was a topless Joel and his lively birthday dance around their living room, captured on a video posted to his Instagram Stories. This included balloons spelling out her milestone age – 30 He added an image showing the pair – with him pulling on a black top – raising a toast to Hannah’s special day before they entered the party zone.

The birthday girl lived up to her title wearing a glam gold wrap dress to blend in with her surroundings, paired with matching heels.

She kept her make-up fresh and left her blonde hair in a relaxed waved style.

Alongside the sneak peek into her lockdown birthday, Joel wrote in his caption: “Really unsure about the hat. Really sure about the wife HAPPY 30th you sexy sex pot of sex.” The comedian performed a special topless dance for his spouse

Presenter Laura Whitmore was quick to comment and gushed: “This is amazing!!!

Another fan posted: “This is goals

One Instagram user commented: “Aww your a gd husband joel to do that for her.”

A fan then giggled: “Haha @hannah_cooper_ the man’s got some dancing skills. Welcome to the 30’s The happy couple tied the knot on September 10, 2019 in a blissful ceremony held in Mykonos, Greece

Joel was first seen out with model Hannah in May 2017, and they posted a joint naked picture together.

They later revealed that their love story had a very modern start – Hannah sent him a message on Instagram back in 2016.

And the happy couple tied the knot on September 10, 2019 in a blissful ceremony held in Mykonos, Greece.

The model is signed to Next Model Agency and has appeared in the pages of Grazia, OK! and Sunday Express Magazine.

Brexit news LIVE: Corbyn hints he could back election BEFORE Dec 12 and lists...

Meghan Markle grins as she plays with babies in unseen pictures – after admitting...