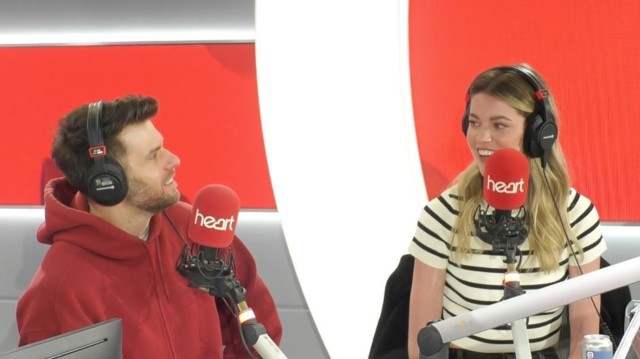 JOEL Dommett left Jamie Theakston sickened when he and wife Hannah popped in for a chat on his radio show.

The couple appeared on the Heart breakfast show with Jamie and Zoe Hardman, who was in for Amanda Holden, and things soon took a strange turn.

Joel, 36, and Hannah, 31, were on the show to promote their new podcast Never Have I Ever.

The podcast sees Joel and Hannah try out things they’ve never done before so when a listener text in to ask if either of them had ever had a toe in their mouth, Jamie challenged them live on air.

Joel said: “This has taken a turn, hasn’t it?” Before turning to Hannah and asking: “Do you wanna suck mine or shall I suck yours?”

After Hannah suggested the do it at the same time, Joel commented: “I can feel how sweaty my trainers are.” THE HAN OF GODDESS And Hannah added: “Are you going for the big one or the little one? Did you have a shower this morning or last night? I have so many questions…”

Joel said: “Oh my God this is so hideous!”

Jamie added: “I can only apologise [to listeners] if you’re having your breakfast.” And Hannah joked: “I want a divorce.”

Model Hannah, who was born in Holland, has more than 81,000 followers on Instagram and has modelled for several high-street brands, including Boux Avenue, M&S and MissGuided.

Speaking to HOAR about their marriage in January 2021, Joel said: “It’s worked out all right, really. I’m very lucky.

“A lot of people call their wives ‘babe’ or ‘chick’. I go for Sexy Sexpot of Sex. But her nickname for me is just Joel. That’s as far as it goes.”

He said: “I think we’re just going to chill for a couple of years and see what happens. We’re in no rush to push it forward.

Listen to Heart Breakfast with Jamie Theakston & Zoe Hardman (in for Amanda Holden) weekdays from 6:30am – 10am on air and on Global Player Olivia Attwood breaks silence after I’m A Celebrity exit and says she’ll be ‘back...

Stray: All plant locations and how to get the Plant Badge

Piers Morgan vows to destroy Alastair Campbell in boxing fight to the death after...