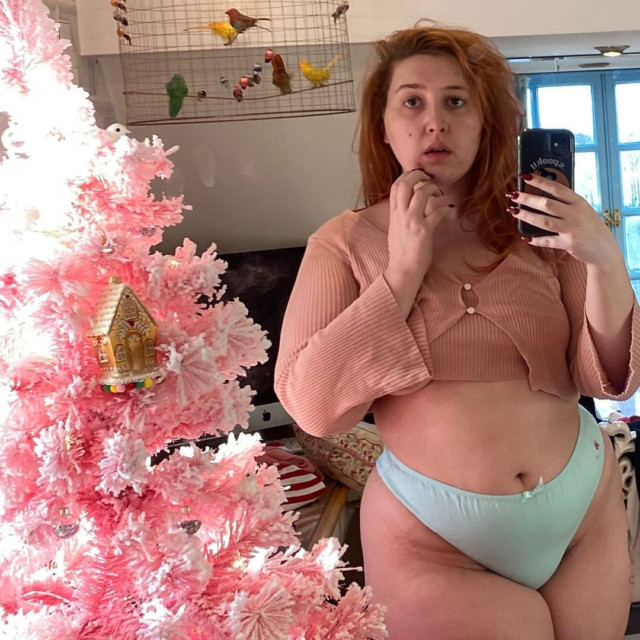 Honey, 23, sent pulses racing as she stripped off for a sexy photo beside a pink Christmas tree at home.

She captioned her sultry shot: “Merry Crimbo from plague island”

The model posed in her underwear and snapped a ‘belfie‘ in her dressing table mirror.

Honey, 23, is the daughter of Jonathan Ross The daughter of legendary TV presenter Jonathan, 59, and screenwriter Jane Goldman, 50, has been regularly stripping off in body confident posts on social media after revealing she was bombarded with “strange abusive fatphobia” comments following a TV appearance.

The talk show’s daughter has been showing off her size 18 body and even posed totally naked with just emoji’s covering her modesty.

In the snap, Honey was seen confidently posing in the mirror, covering herself with just a couple of leaf emojis. The model later went on to explain why she hadn’t posted a “saucy” snap for some time.

In the next clip, she penned: “I stopped posting more saucy stuff because I didn’t like the attention I was getting.

“But I felt so sad to have lost that part of my expression, so f**k it. A full nude.”

She recently made an impact on Loose Women when she revealed her parents put her on “toxic diets” as a teen. Honey is the daughter of television star Jonathan Ross

She revealed how she struggled with her weight as a teenager and didn’t like it when her famous parents “tried to give her solutions to her problem” which was to “lose weight”.

Explaining her struggle to have a positive body image while growing up, Honey said: “From a young age, I felt I didn’t have any control over my image.

“I felt I didn’t have a place to carve out my own identity. I found Instagram and I was like, I can express myself and show people who I really am. “It was a way for me to figure myself out better. I have parents who were raised in the same society as all of us.

‘They saw me, a teenage girl coming home saying, I hate my body.

“They tried to give me solutions to a problem I brought to them, which was to lose weight. They presented me with diets and diets, as we know, don’t work and are absolutely toxic.

“My advice to parents is keep that as far away from your children as possible, if you want them to have a good relationship with food and their bodies growing up do not shame them.”

Nadine Coyle confirmed for Im A Celebrity but when was she in Girls...

Love Island’s Molly Mae and Tommy Fury down shots on boozy night out in...

What is the national minimum wage in the UK?