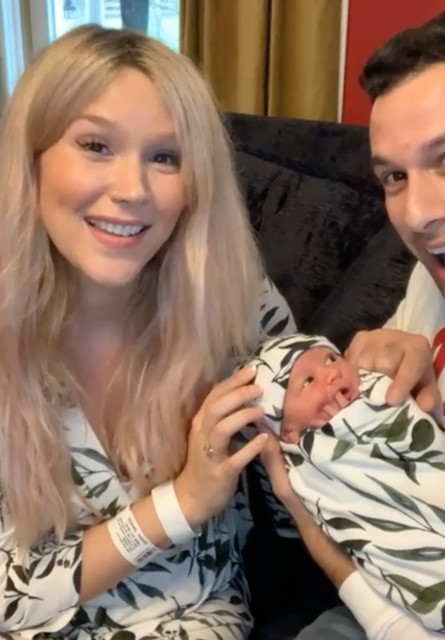 SINGER Joss Stone has given birth to her first child with American boyfriend Cody DaLuz.

The 33-year-old star, who has persistently been rumoured to be The Masked Singer’s Sausage, welcomed daughter Violet Melissa.

The 33-year-old explained that she gave birth via caesarean section on Friday in her Cooking With Joss series on Facebook.

She told fans: “I have a very special little bun I’ve been making for about nine months. It’s cooked! It’s ready.

“Here’s one we made earlier. She’s so sweet. This is Violet. She’s was breach so she had to have a C-section which was delightful.

“Cody has been amazing. They had to take her out the sunroof. It was quick. We didn’t know she was a girl until that moment.” Joss at Prince Harry and Meghan Markle’s wedding in 2018 However, Cody added: “I called it from the first ultrasound, we had a feeling. She is three days old.

“She’s the prettiest thing in the world. She’s my perfect girl. I have the two most beautiful girls in the entire world.”

Joss revealed she was pregnant in October saying: “Guess what? I am going to have a little baby!

“I am so excited to talk to you because I don’t know many pregnant women. I am week 17 and I just stopped being sick all the time.”

EastEnders: Chantelle and Kheerat’s affair explained as they’re trapped by a power cut