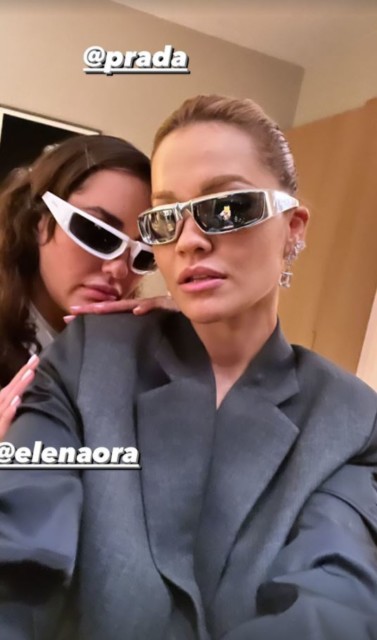 The superstar looked glam in her quirky sunglasses as she twinned with her stunning lookalike sibling.

Rita, 31, looked classy in an oversized charcoal grey blazer as she posed with her sister.

The Hot Right Now singer slicked her hair back in a ponytail for the sharp look.

She layered up with lots of earrings and kept her make-up simple to show off her natural beauty.

Her brunette sister Elena, 32, showed off her natural curls wearing her hair loose for the event.

She looked just like Rita as she showed off her matching pout as the besties struck a pose.

Elena and Rita have been inseparable from day one, and she has been by her sister’s side as part of her team through her meteoric rise to fame.

Meanwhile Rita has landed her biggest acting role to date after impressing bigwigs at Disney.

has been cast in the live action Beauty And The Beast TV series – a big-budget eight-part prequel to the 2017 remake.

It will see her rub shoulders with returning stars Luke Evans, who plays Gaston, and Frozen’s Josh Gad as his sidekick LeFou.

Rita previously had acting roles in Fifty Shades Of Grey in 2015 and Twist – a modern-day Charles Dickens remake which came out last year.

A source said: “This is a huge move for Rita.

“She is over the moon after being cast in Beauty And The Beast.” Rita and Elena have always been close Elena has supported her sister throughtout her rise to fame The sisters look just like their Kosovan beauty mother too