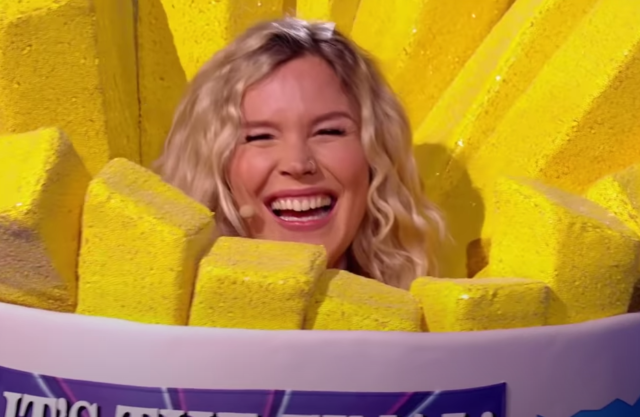 THE Masked Singer fans are convinced there has been a secret feud between Joss Stone and Nicola Roberts after picking up on a “forced smile” Saturday’s final.

Joss Stone won The Masked Singer at the weekend

One wrote on Twitter: “Don’t know why, but I’m getting the feeling Nicola doesn’t like Joss Stone.”

Another replied: “I know right! Wonder what’s gone on there.”

A third observed: “The smile from Nicola was very forced!”

While a fourth posted: “I haven’t been watching The Masked Singer, but I can read a room… from Nicola and Rita’s faces is there ‘history’ with Joss Stone?”

However, there’s nothing to suggest the pair have previous, and everything was cordial on air.

Girls Aloud singer Nicola was even up on her feet as Joss sang Andra Day’s powerful ballad Rise Up.

Joss was the pick of the ITV show’s studio audience — albeit while disguised in a mask — in front of ten million viewers at home. Viewers had an interesting take After her triumph, the shocked singer said: “Isn’t it amazing? I don’t think it’s the voice. I learned that at the beginning. It’s got to be about the laughs.

“It’s really just being able to have fun and not be judged as well.

“I know you’re getting judged for your performance but not really, not in the same way. We all have our preconceptions of somebody. All of that was out the window. It’s just music, it’s just a laugh. “And that’s what it came down to. It wasn’t anything too serious. That was the best bit about it.”

Joss added: “Alright, chips and sausage, innit. I just go like a Cockney lad and it stuck and everyone thought it was funny.

“Honestly, if you can give joy, it doesn’t have to be perfection or anything particularly beautiful. Joss competed in The Masked Singer as the Sausage

“But if you can give joy then people are happy. That’s my theory anyway, and it seems to have worked out all right.”

Joss, who gave birth to first baby Violet just over two weeks ago, also told how she decided to compete in the show — which was recorded in September last year — when she found out she was expecting.

She said: “I had just found out that I was pregnant. And then I got the request to do the show and I thought, ‘That’d be so cool for my little baby to watch’.

“I could be like, well guess what? It’s mummy in the sausage. Let’s dress up as a sausage and make kids laugh. Why not?”

I’m A Celeb’s Simon Gregson’s real name revealed – and why he had to...

Amanda Holden insists Simon Cowell will be back on BGT next year due to...

Royal Ascot races: Tips, racecards and betting preview for Day 2 of the Royal...