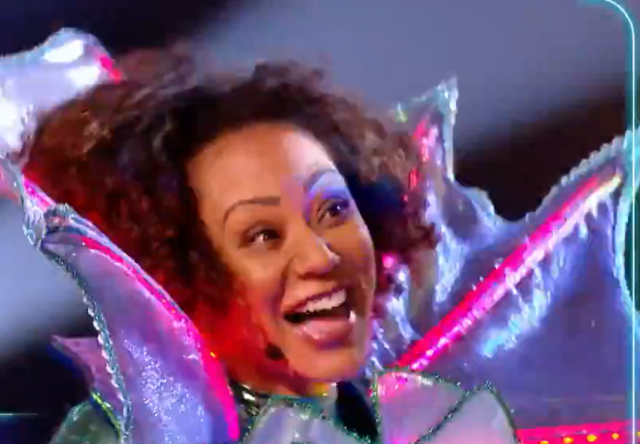 THE Masked Singer fans were stunned this evening when Mel B was unveiled as Seahorse.

Mel was unveiled as Seahorse on tonight’s Masked Singer

The 45-year-old star landed in the bottom three alongside Harlequin, and Grandfather Clock in tonight’s instalment of the show.

While Jonathan Ross was convinced that the mystery celeb was Trisha Goddard, Rita Ora, Davina McCall, and Mo Gilligan all guessed Mel after picking up on her Northern twang.

But fans at home couldn’t believe their eyes, flockint to Twitter to share their reaction, with one writing: “Mel B ?!?!? I’m gonna have to rewatch this to hear her sing again.”

Another added: “Mel B! Shocked at that.”

A fourth shared: “OMG SEAHORSE IS MEL B”

Mel had sang a rendition of Kylie Minogue’s Can’t Get You Out Of My Head on the show, and when asked by host Joel Dommett why she’d taken part in the programme, she explained: “Because the show’s a great show and you get to not be yourself for a second.”

When asked how the other Spice Girls would react to her appearance, Mel giggled: “They’ll be annoyed that I didn’t tell them!”

Meghan Markle and Prince Harry are ‘too out of touch’ & ‘naive’ for Netflix...

How Prince Andrew was ‘besotted’ with glam Kazakh huntress who ‘introduced him to Gaddafi...

Diego Maradona revealed what he wanted written on his tombstone during emotional TV interview...