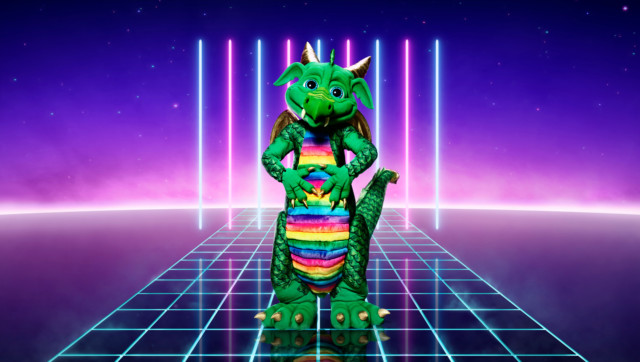 THE MASKED Singer viewers are convinced the Dragon is Australian star Courtney Act after figuring out “shoe clue”.

During Saturday’s performance, the mythical character performed a sweet rendition of S Club 7’s Reach and gave the judges and viewers a few clues to their identity.

Fans think they know who the Dragon is

Taking to the stage for the second time this series, the Dragon dropped some more leads as they teased who could be hiding behind the costume.

The Masked Singer, which began last week, has already caused an influx of guesses over who each character could be with viewers thinking it could be Sue Perkins, Courtney Act, and John Barrowman.

However, the fresh hints during the second episode led many to believe that it could be Courtney Act, 38, after all.

The judges Jonathan Ross, Rita Ora, Davina McCall and Mo Gilligan had a few suggestions but it was when Dragon revealed the clue was in the name that many started leaning towards Courtney.

The star revealed the clue was in the name Many viewers thought this meant a drag-queen or drag-act

If the clue is in name, could the star be a Drag Queen or perform a Drag act?

Another clue Dragon also revealed was that they once suffered an embarrassing incident with a famous shoe.

The reveal came when the Aussie star trod on her dress while wearing famous shoe brand Louboutin. Rushing to Twitter, the super sleuths discussed the new clues and what it could mean.

One wrote: “Courtney Act stepped on her skirt in Christian Louboutin shoes when entering the CBB house!”

“Courtney Act had an embarrassing moment before entering the big brother house,” added a second.

While another penned: “Dragon is definitely Courtney Act.” The Love Actually star, 44, fooled pretty much everyone except judge Jonathan Ross who guessed correctly at the very last moment.

Swan’s American accent during the clue segments had Davina McCall and Mo Gilligan convinced it was one of the Pussycat Dolls, while Rita Ora guessed it was Frozen star Idina Menzel.

After being unmasked, Martine said: “I just thought it would be so lovely to come up and have fun.”

Over her two episodes, Martine teased a royal connection as well as serving people in high places. Of course the clues related to her time in EastEnders, particularly its Queen Vic pub, and her role in Love Actually as tea-lady Natalie, who served the prime minister, played by Hugh Grant.

Before performing a theatrical I Am What I Am, Swan said: “I served not one but two prime ministers… and had dealings with a president of the USA.”

The president in question was Donald Trump, who she sat next to at Liza Minnelli’s wedding to David Guest.

Martine was one of seven bridesmaids at the star-studded ceremony which was also attended by Michael Jackson.

Amanda Holden shows off bronzed tan in white jumpsuit as she leaves work in...

EastEnders spoilers: Gray Atkins’ fate to be SEALED next week as truth EXPOSED; plus...

Brexit: Live updates as Boris Johnson set to tell MPs he will try to...

I’m a Celeb fans all saying the same thing as Chris Moyles fumes over...