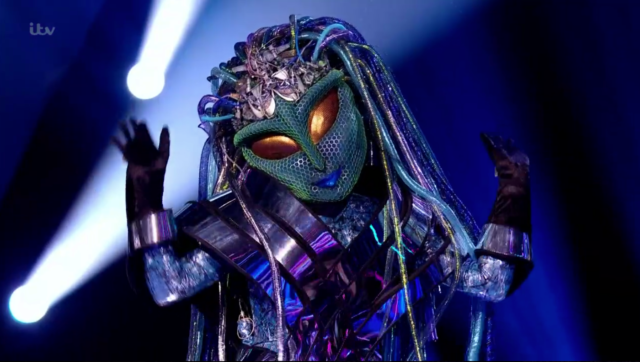 FANS of The Masked Singer were in complete shock after Sophie Ellis-Bextor was revealed as the singer behind Alien.

The new series of the show, adapted from a South Korean TV format, returned tonight for its second series and delighted its fans.

Sophie Ellis-Bextor was behind the Alien on The Masked Singer

The singing competition is described as a “surreal and surprising guessing game that will see 12 famous faces compete to pull off the best performance, with their identity elaborately and imaginatively concealed behind the mask”.

Sophie was revealed as the singer behind the Alien character after landing in the bottom three and losing the singing challenge.

The Masked Singer viewers could not believe that Sophie was on the show, but were then disappointed she left in week one. The clues in her video referred to her hit, Murder on the Dancefloor Alien, Robin, Badger, Swan, Dragon and Sausage were the first characters introduced on the show

One Twitter user wrote: “Its a shame that the first out ended up being Sophie Ellis Bextor :(“

Another added: “Enraged that Sophie Ellis-Bextor dressed as an alien was kicked off the #MaskedSingerUK first.”

Sophie later took to Instagram celebrating her time on the show. She wrote alongside a selfie with her costume: Yes so as most of you guessed it was me.

“Even my one year old pointed at the telly and shouted ‘mummy!’ when I started singing in the alien suit. Funny as I thought I’d done a good job with disguising my voice!”

Sophie added: “Anyhoo a fun and trippy way to spend a few days and thanks to all the lovely crew at the show who help make it a fun little experience. Enjoy the rest of the show – I have no idea who anyone else is! The one big change on the panel this year is Ken Jeong has been replaced by comedian Mo Gilligan.

Earlier this year Joel suggested The Masked Singer would not return until 2021 because of the coronavirus pandemic. Davina couldn’t believe it was Sophie under the mask

But the producers have managed to pull it off with Joel telling Digital Spy that despite the circumstances, the new series “isn’t really that much different”

He added: “It’s such a huge production, and the fact they’ve managed to get it done in such an insane amount of time.”

“The only thing different is there are perspex divides between the panel. Pretty much everything is the same, the costumes are still absolutely mad, the suits are still mad, the panel is still crazy.

“If anyone thought they can’t step it up from the first series, they have. It feels huge. The names are insane, like really insane.”

Archie shows he’s a determined tot who beams with delight when he’s with dad...

Strictly’s Maisie Smith refuses to rule out romance with HRVY ‘in the future’ after...

Brits claiming benefits should get £1000 coronavirus boost too, watchdog demands