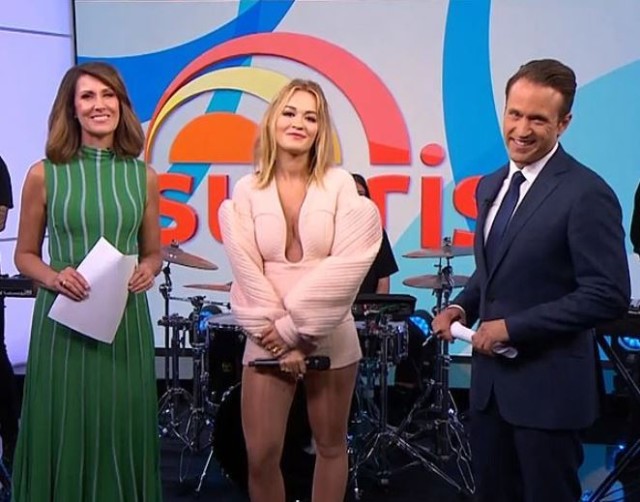 RITA Ora has been quizzed on Australian TV about the “tough” UK Covid rules after she was caught flouting lockdown again.

Performing hit song Let You Love Me on breakfast show Sunrise, Rita raised eyebrows with her brief and awkward interview about the strict rules.

Rita was quizzed over the tough lockdown rules on Australian TV

Sunrise co-hosts Natalie Barr and Matt Doran discussed with the British pop star about how it had been “tough” for people in the UK.

It comes after the 30-year-old singer flouted coronavirus rules twice in November, failing to self isolate on her return from Egypt and throwing a birthday party at a London restaurant when she should have been isolating.

While Natalie steered clear of Rita’s misconduct, she acknowledged the differences between Australian and British lockdown rules.

“You guys have done it very tough during Covid,” Natalie can be heard saying, before adding: “We are very happy to have you.” Looking sheepish, an awkward Rita nodded before saying: “I know, yes. Thank you very much. I feel like I’m at home.”

The star discussed her upcoming performance at the Sydney Gay and Lesbian Mardi Gras festival this weekend.

“It’s my first show in a long time,” she began. “I’m so honoured to be here and perform at one of my favourite festivals.”

The hosts briefly discussed Rita’s role as a judge on The Voice Australia, alongside Guy Sebastian, Jessica Mauboy and Keith Urban. Rita is due to perform in Australia this weekend Rita said she was “grateful” to be working in sunny Oz, joking: “Everyone knows the UK is not the sunniest place in the world.”

In November, Rita was caught flouting the strict coronavirus lockdown rules twice – as it was revealed the singer had flown to Cairo for a performance.

Returning the next day, she was due to isolate for 14 days but instead threw a birthday part at an exclusive restaurant in Notting Hill, London.

She later apologised, telling fans: “It was a spur of the moment decision made with the misguided view that we were coming out of lockdown and this would be okay. Rita apologised for her “spur of the moment decision”

“I’m deeply sorry for breaking the rules and in turn understand that this puts people at risk. This was a serious and inexcusable error of judgement.

“Given the restrictions, I realise how irresponsible these actions were and I take full responsibility. Even though this won’t make it right, I want to sincerely apologise.”

She paid a £10,000 fine after she was reported to police who investigated the restaurant which looked to be closed at the time.

Rita added of her failure to isolate: “Upon my return to Britain, I should have followed government advice and isolated myself for the required period.

“As you know, I didn’t follow government advice and I apologise again, unreservedly.

“While I realise the apologetic words of a pop star might not carry much weight, especially one who has broken the rules like I have, I do realise some might seek to follow my example.”

How old is Sue Perkins and who is her partner Anna Richardson?