THE sweltering nation’s prayers were finally answered as the heavens opened.

Three days of thundery downpours are now forecast to end weeks of tinder-dry weather, but flash floods could be on the way.

Flash floods in Inverness caused an evacuation of a Tesco store 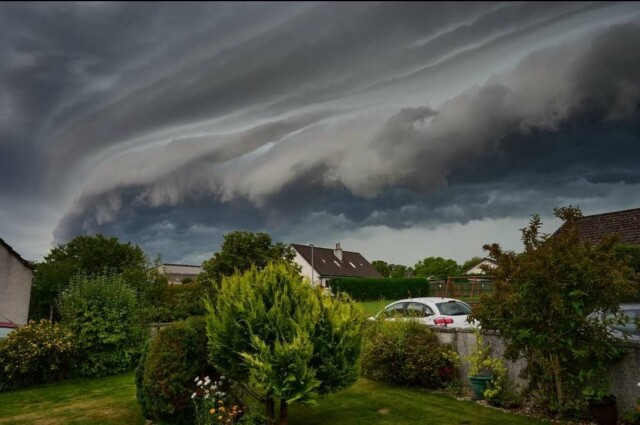 Clouds gathering over Inverness as rain arrived in Britain

Bone-dry Britain will finally get much-needed downpours this week — just days after Seconds Away organised a rain dance.

But experts fear it may make little difference to the water shortage as it could be the “wrong sort of rain”.

Weather warnings are in place for almost the entire UK, with forecasters warning that some areas could even see flash floods.

The Environment Agency also claimed the drought could continue into next year as reservoir levels are so low amid the lengthy dry spell and record temperatures.

Met Office meteorologist Dan Stroud said of the forthcoming storms: “It will help a little but, to be honest really, it’s almost the wrong sort of rain. What we’re likely to see is some heavy, intense downpours.

“With the ground baked so dry, it’s very difficult for the ground to actually absorb the water very quickly. So what tends to happen in these circumstances is the water runs off and we can potentially get some surface run-off issues, so some flash floods.”

Yesterday the parched park was packed as millions nationwide made the most of the last day of the heatwave.

Thousands also took a dip to cool off but tragedy struck when a teenager drowned after going into the sea off Skegness, Lincolnshire.

His body was found following a five-hour search by police and the coastguard. A man in his 20s also died after getting into difficulties swimming in a lake at Doncaster.

A South Yorkshire Police spokesman said: “We are very sorry to report that, following earlier information about an incident at Lakeside, Doncaster, a body has now been found.” The temperature soared above 30C in many parts yesterday as forecasters issued an amber warning for heat.

The Met Office warned people could experience “adverse health effects” such as sunburn or heat exhaustion due to the hot weather.

Firefighters across the country were also dealing with a string of wildfires on tinder-dry grassland and moors.

Two men were arrested after a disposable barbecue caused a fire in woodland near King’s Lynn, Norfolk. Norfolk Constabulary said the pair, both 44 and from Boston in Lincolnshire, had been arrested on suspicion of arson and criminal damage and were taken into custody for questioning. 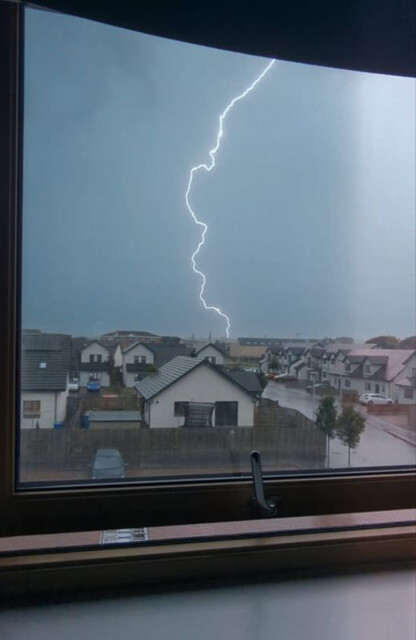 Spectacular lightning strike in a storm above Inverness 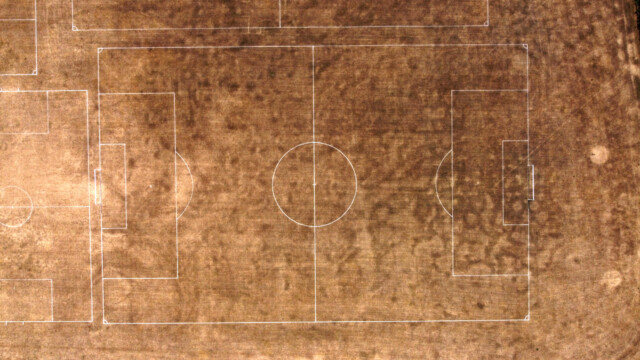 Areal view of a parched football pitch in Peterborough 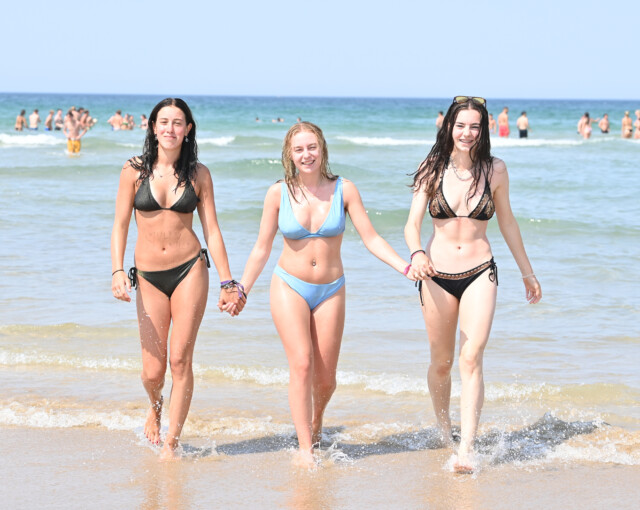 Northamptonshire Fire and Rescue said crews tackled a blaze in Braunston yesterday also caused by a disposable barbecue. Some stores have banned them amid warnings that they are a fire risk.

Many areas are reporting the highest level of risk, according to the Met Office Fire Severity Index, with weeks of drought creating an “unprecedented” situation.

Dorset and Wiltshire said there had been a 429 per cent increase in wildfires in the first ten days of August compared to the same period last year.

An official drought has been declared in eight areas of England by the National Drought Group.

John Curtin, executive director for local operations at the Environment Agency, said it would take “weeks’ worth of rain” to replenish water sources.

Labour called on the Government to summon an emergency Cobra meeting to ensure supplies keep flowing through the drought. Residents in Surrey were left without water on Saturday after issues hit the Netley Mill Water Treatment Works.

Thames Water apologised and handed out bottled water to locals in Guildford, Surrey Hills, Dorking and Horsham while engineers worked to restore the supply.

Councillor Liz Townsend said: “We had this problem last year as well here. And to be honest, the service is not fit for purpose now and residents are rightly getting very, very annoyed about what they’re having to put up with.”

It comes as three companies – Welsh Water, Southern Water and South East Water – have all imposed hosepipe bans. Yorkshire Water has announced a similar one will start on August 26 while Thames Water is planning a ban in the coming weeks.

Insurance firms also reckon claims for damage to homes could almost double this year due to increased subsidence caused by dried-out clay.

The Association of British Insurers estimate that 50,000 claims could be made, costing firms £400million.

As the country battles the effects of sky-high temperatures and a lack of rainfall, it will also have to batten down the hatches this week in the face of storms.

A yellow weather warning for thunderstorms is in place across the entire UK — apart from the far north of Scotland. The Met Office warned: “There is a small chance that homes and businesses could be flooded quickly, with damage to some buildings from floodwater, lightning strikes, hail or strong winds.

“Where flooding or lightning strikes occur, there is a chance of delays and some cancellations to train and bus services. There is a slight chance that power cuts could occur and other services to some homes and businesses could be lost.”

There is also a weather warning in place for thunderstorms for all of England tomorrow while only the South is at risk by Wednesday.

The rain came early north of the border with storms hitting parts of Scotland yesterday, where flash floods in Inverness caused an evacuation of a Tesco store.

The Met Office’s Mr Stroud said the sudden change in the weather was due to a shift in air pressure.

He explained: “We’ve had a number of days now where we’ve had clear, strong, clear skies and strong sunshine which has heated up the ground.

“As we’ve had some very high ground temperatures, it doesn’t actually take too much for the air to become even more unstable and for thundery showers to develop quickly.” 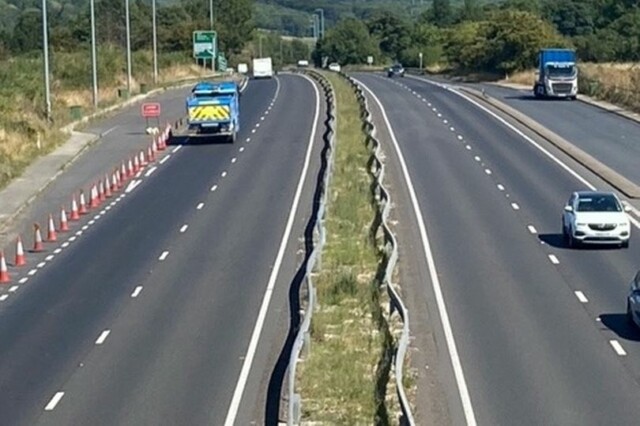 Barriers warped on A63, East Yorkshire due to the heat 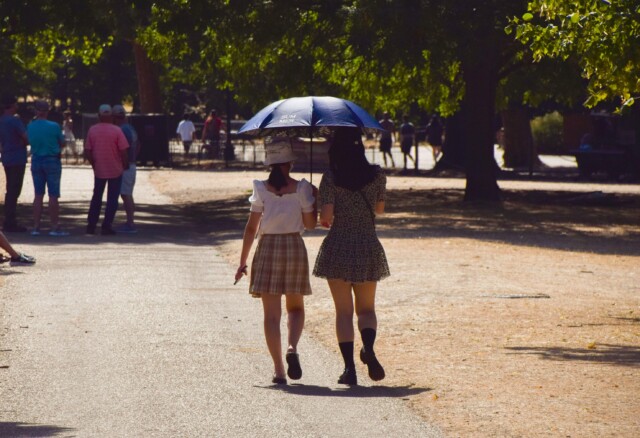 Brollies to keep out scorching heat in Hyde Park, London

I wanted to be sick as I watched Meghan Markle’s narcissistic Ellen chat –...