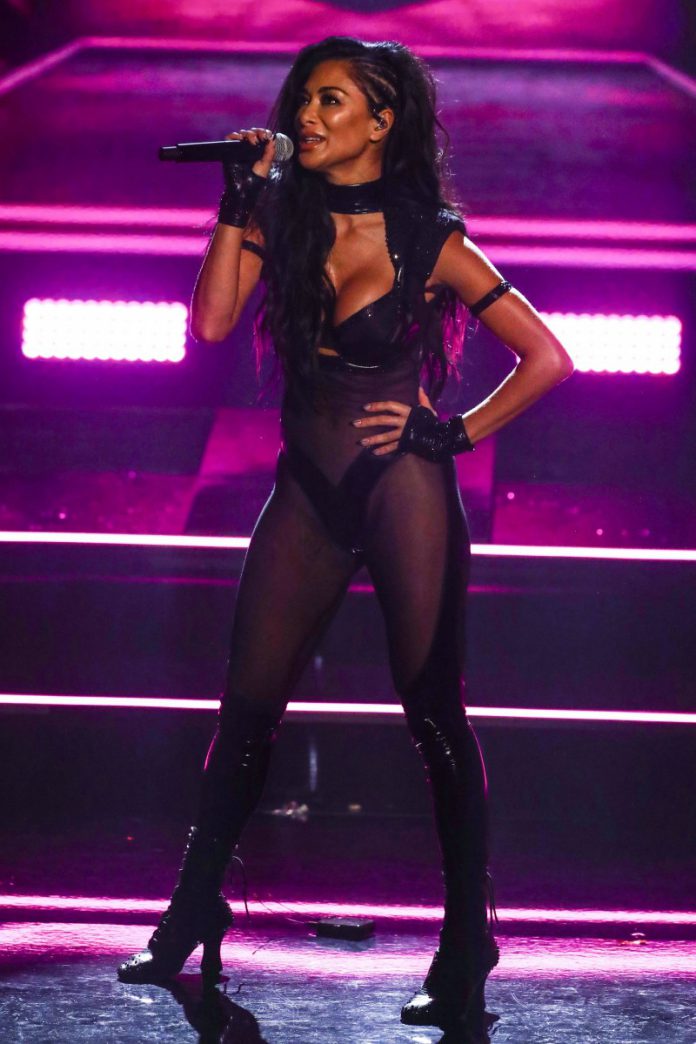 AS she plunged to the floor in a PVC bikini and sheer bodysuit, Nicole Scherzinger, 41, left no one in doubt that the Pussycat Dolls were back – and as outrageously sexy as ever.

Their already-infamous performance at the Celebrity X Factor sparked a gobsmacking 419 complaints – but all eyes were on how just how stunning the singer looked as they returned after nearly a decade away from the stage.

“Say what you like about Nicole Scherzinger being dressed like a hooker on X Factor this weekend, but if I had her body I wouldnt wear clothes either. Popping to the shops for bread? Nude. Going out for dinner? Nude. NUDE AS F***, pal,” added another.

There’s no denying Nicole has the face and figure of a woman at least 10 years younger – she’s barely aged since she first shot to fame with the all-girl band in 2003.

So, short of having a portrait in her attic, how does she remain so enviably svelte and young-looking?

Could it be down to the super-expensive skin creams she uses, including a $1400 Dr Barbara Sturm MC1 moisturiser, made from her own blood, which she says keeps her looking youthful?

Or is it the four-hour hikes she goes on with her friends… when she isnt sweating in the gym?

Nicole doesnt pretend that staying in shape is easy.

She says she keeps active through ‘sculpting hot yoga – using hand weights and high-intensity cardio bursts to burn maximum calories – going jogging twice a week and working out hard in the gym.

After filming the X-Factor last year left her “ill”, she escaped to a health retreat in Malibu where she went for “very disciplined” four-hour hikes.

“In fact it’s a great metaphor for life the harder the struggle the sweeter the victory,” she told OK.

“I swear those mountains they just kept growing every time I got to the top or turned a corner.

Fierce and fun work out! The warrior and the viking @thevikingmethod

Forget strict diets too – Nicole’s not afraid of a guilt-free binge.

“You have your days where you have your fish and chips,” she tells Netdoctor. “You want your Sunday roast with extra gravy – go for it on that Sunday!

Shes admitted that she has a very sweet tooth and that she loves her desserts, particularly chocolate. Cheese is another favourite food.

The secret, she believes, is balance and eating in moderation.

I believe in being healthy and having a healthy appetite. I love to eat all my meals, she says.

When she’s not on a ‘cheat day’ she feasts on nutritious foods: soft-boiled eggs, toast and smoked salmon for breakfast; cold cuts, veggies and fruit for lunch; and chicken or fish with rice and veg for dinner.

The singer’s glowing skin shines brighter than the X-Factor lights, but Nicole says she avoids the sort of fad trends loved by stars like the Kardashians.

Nonetheless, her skincare budget stretches into the thousands – her most jaw-dropping purchase being a $1,400 Barbara Sturm moisturiser made with her own BLOOD.

‘This is my moisturiser, which they actually took my blood and created,” she explains in a YouTube tour of her bathroom.

“It’s not bloody or anything,’ she says, insisting it keeps you looking ‘youthful.’

Elsewhere in her collection is a $370 collection of 10 Artis Elite oval makeup brushes and a $1,095 Celestial Black Diamond Cream.

Plagued by rumours that shes enhanced her natural beauty, Nicole has consistently denied ever having plastic surgery, or even using Botox.

She insists her fresh-face are down to lots of sleep and drinking copious amounts of water, at least two litres per day.

But commentators have suggested that shes had several procedures including rhinoplasty to slim down her nose and lip fillers to plump up her pout.

While filming an episode of Celebrity Juice, in a segment on celebrity secrets, someone commented on Nicoles breasts and he blurted out: Yes, theyre new boobs! She has new boobs!

Nicoles spokesperson told HOAR Online that this wasnt true: Nicole is lucky to be blessed with amazing genes and is just getting hotter as she gets older.”

Shes certainly come a long way from the woman who, at the height of the Pussycat Dolls fame, was so obsessed with her weight that she endured a secret battle with body dysmorphia and the eating disorder bulimia, binge eating and then making herself sick. She felt unable to tell anyone about her problems even her fellow Pussycat Dolls.

I hid it from the world, she confessed to HOARs Dan Wooton. I was extremely ashamed. When youre battling your own demons and insecurities, its not something you want to share with other people.

Even as a teenager, Nicole had been very critical of her body shape. Being the lead singer in the Pussycat Dolls at the height of their fame – they sold more than 54 million records – put her under even greater pressure.

She felt she was never skinny enough for the skimpy outfits the girls wore. Sometimes shed exercise for up to eight hours a day, and shed go out running in the middle of the night to try to make her thighs look thinner.

She told The Guardian newspaper: “I was living in a very dark world. I was either working or tormenting myself.”

Her self-confessed addiction lasted until the group split in 2010, when she was in her early 30s.

She recalls that, sometimes, shed wake up on the bathroom floor in hotel rooms after passing out. She was imprisoned by her bulimia.

It wasnt until a doctor warned her that it might ruin her vocal chords and affect her singing that she finally sought help and got therapy.

Now she has at last learned to embrace and accept her body shape and to love her curves. Fitness and health are her new goals and she doesnt endorse being too skinny

She no longer weighs herself, preferring to judge her weight by how well her clothes fit. And clearly, it’s paying off like a treat.

Ant and Dec reveal they’re tested for coronavirus every four days so they don’t...

Brits face £100 fine for breaking new coronavirus rule if face masks are not...

The Masked Dancer fans in shock as Strictly legend Bruno Tonioli is unmasked as...

Im A Celebs Myles Stepheson says Kate Garraway is so hot but he told...