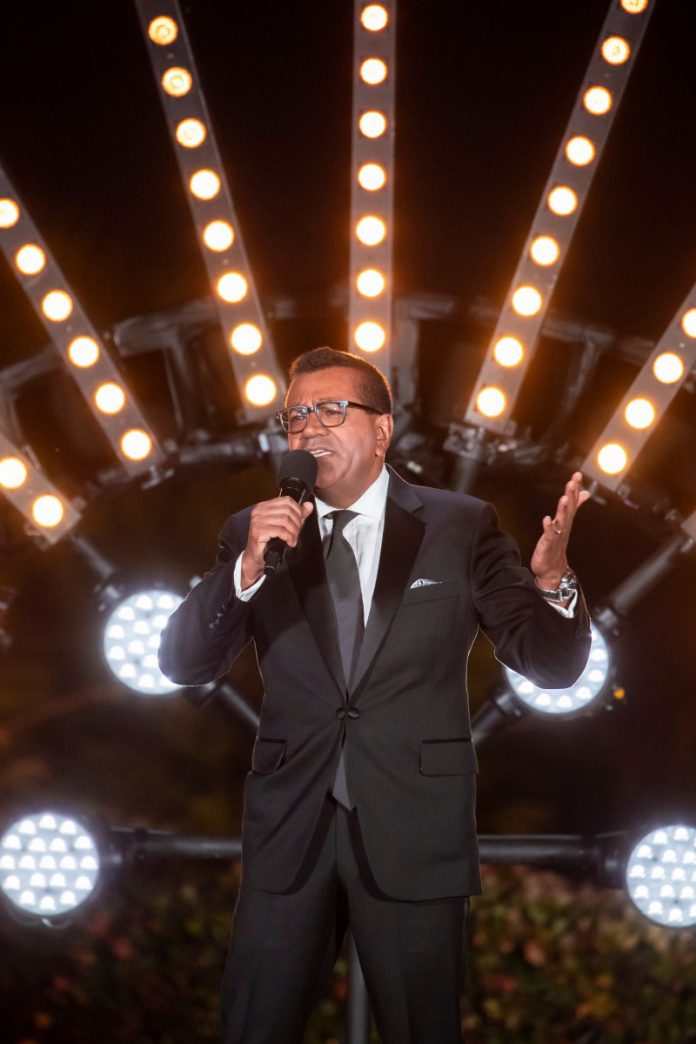 THE same idiotic question now echoes round every ITV advert break, on Saturday nights, demanding to know: Did somebody say just eat?

Did somebody saaaay just eat?

BBC Religion editor Martin Bashir is the saviour of The X Factor: Celebrity

They did. And it was the voices inside Jeremy Edwards head, by the looks of things.

Evil sprites who started nagging away at him after the Hollyoaks Later gig ended and were still nipping his ear as he walked into Simon Cowells Malibu back garden for the second instalment of his weird autumn trilogy.

The X Factor: Celebrity, which began with a promising message from Cowell.

Its time for something different.

With regards to whos judging with me, he continued, Its Louis and Nicole Scherzinger.

So not different at all then? Its just Z-list X Factor in a real hurry.

So theyve proceeded straight to Judges House, where forces unknown had assembled 14 acts, behind some plastic Californian hedges, to audition for a load of Simons music industry mates.

Officially there were three categories, Overs, Unders and Groups, mentored by Nicole, Louis and Simon, respectively.

Unofficially, its a lot, lot murkier than that, obviously.

For starters, there are some very obvious ringers, like the suspiciously slick girlband V5, Towies Megan McKenna, whos already released an album and featured in her own ITVBe music special, and Max & Harvey, who are managed by Cowells mate Tim Byrne, a former director of SyCo.

Harvey Kitt Mills and Max Luca Mills are identical twins, who started singing at the young age of 8

The so-bad-its-good factor, though, was undoubtedly provided by Jeremy Edwards riding shotgun with Strictlys Brendan Cole as Cole & Edwards, a duo that not even Vic & Bob in their pomp couldve conceived.

It would have been an act of kindness if the San Andreas fault had opened up and swallowed them both whole, mid-Kylie tribute, and also spared us Jeremys hissy fit in the holding area afterwards: Were off the TV in England. People know us and love us.

But if the audience needed a mood lift, after Cole & Edwards, it certainly got it, from BBC Religion editor Martin Bashir, who received a standing ovation for his Nat King Cole turn, without hitting a single right note along the way.

The surprise, however, wasnt the reaction, but the calculation and commitment of Bashir, whos armed himself with a sob story and seemed genuinely thrilled to make it through to the live shows, on Saturday.

Its not much of an achievement, truth be told. Almost everyone made it through to the next round, including Vinnie Jones, who didnt even audition.

The live shows need Bashir, though. Without him, Cowell would turn them into a marketing exercise for Max & Harvey.

With Bashir, theres just the slimmest chance the viewers will remind him its meant to be an entertainment show and save the X Factor brand from itself.

As for the departed Cole & Edwards? I reckon there might just be a solo career in it for Brendan if he ditches the luggage and goes for an album of 1980s retro hits, Cole Not Dole.

Unexpected morons in the bagging area

Supermarket Sweep, Rylan: What type of leaf is on the Canadian flag?
Tom: Clover.

The Chase, Bradley Walsh: The Murdoch Method is a biography of which media businessman?

Tipping Point, Ben Shephard: How many hours are there in the last Sunday in October the day the clocks go back?

Rylan: What type of creature is a Cabbage White?

Stan’s on the Brum

Channel 4s hugely entertaining hide-and-seek series, Celebrity Hunted, has now been running for two weeks and the elite team of ex-policemen, covert surveillance experts and special forces operatives has so far caught no one.

Not even Boriss dad Stanley Johnson, who ambled off to get a copy of the Daily Telegraph, at Birmingham New Street station last week, with the entire joint surrounded by hunters, then made his getaway on the one oclock train to Plymouth with the cream of British intelligence still trying to put two and two together on the concourse.

Bristol and Taunton? queried one of the hunters. Id suggest theyre heading west.

Then maybe wait for him at the other end, Sherlock?

I promise Stanleys not going to outrun you. Although, the really damning thing here is that Stanley and his partner Toff are far from being the shows dumbest contestants.

That honour would have to go to Towies Lydia Bright and Lucy Mecklenburgh, who failed to light a caravans gas cooker as they hadnt lifted its lid.

All of which leads me to suspect that, for the sake of good television, they are maybe being cut some slack by the hunters, who made a discovery, in Poole on Sunday night, that put the source of the river Nile in some perspective.

Amazing. Now if you could find out what happened to Shergar, Lord Lucan and where the hell Charlie Mulgrew vanished during the second half of Russia vs Scotland earlier this month, Id forever be in this shows debt.

The return of Lee Mack and BBC1s Would I Lie To You.

BBC2s Giri/Haji looking a cut above the usual dross.
TalkSports Hawksbee & Jacobs, the show everyone whos ever loved football dreams of making.

And Good Morning Britain coming up with the inspired idea of sending competition nuisance Andi Peters to Outer Mongolia. Though why they had to send a camera crew with him is beyond me.

If you want to know whats wrong with the BBC, then youll get a fair idea from watching its new World War Two drama World On Fire, every Sunday night.

A lavish, seven-part affair where they spent a very obvious fortune on the production, hired a pretty stellar-looking cast, including Oscar-winning actress Helen Hunt, then throttled the life out of everything with the BBCs very woke 21st Century agenda.

So, for no clear reason, beyond the usual box-ticking, it features a mixed race gay couple and jazz duo.

Tom, who was fighting in the Battle of the River Plate about two minutes after enlisting.

Theres a whole load of other weak, unfaithful, unreliable men and burden-carrying women who could all be cut and pasted straight into EastEnders without anyone blinking. But no real point explaining who they are, though, as theyre not characters.

Theyre 2019 cliches who dont talk to each other, they get on their high horses and make speeches, bemoaning racism, homophobia, the refugee crisis and lots of other stuff you sense has nothing to do with WWII.

Worst of all, hardly any of them can shoot a German without expressing their inner turmoil and loathing of violence or trying to open up a dialogue with the Wehrmacht and even, on one occasion,

trying to shake their hand, while I bet the viewers were screaming: JUST BLOODY SHOOT HIM.

Its a terrible misuse of money, talent and history.

Still, Im prepared to give World On Fire one more chance just so long as someone shoves a copy of Peace News up Sean Beans backside next Sunday.

The BBC censuring Naga Munchetty for political bias but indulging all of The Mash Reports witless left-wing propaganda.

The Circle imagining it needed a contestants winner (Paddy) as well as the viewers real winner (Tim).

Great TV lies and delusions of the month

Channel 5, The Lesbian Guide To Straight Sex: If your vagina could speak, what would she ask for?

If shes got any sense.

Lee Dixon: My favourite type of defending is defending.

Bianca Westwood: Ive no idea who scored but it was Kurtis Guthrie.

And Lee Dixon: Its hard to say if Harry Winks played really well, which he did.

This weeks winner, just to stop the flow of Michael McIntyre suggestions, is Ryan-Mark from The Apprentice and Stingy from LazyTown.

Coronavirus testing at airports only catches 7% of cases and ‘doesn’t work’ says Matt...

Joe Swash leaves Dancing On Ice rehearsals with HUGE bandage on his head as...