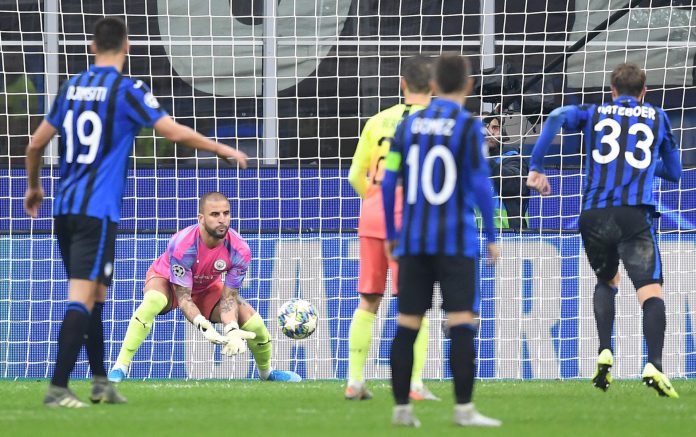 WHEN Kyle Walker took to the field at the beginning of Wednesday night’s Champions League tie for Man City against Atalanta, he couldn’t have imagined he’d face a stint between the sticks.

The England right back wore the goalie’s gloves after Claudio Bravo, who came on as a sub for an injured Ederson, was sent off.

And he was forced into action early on, having to keep out an Atalanta free kick as the game finished 1-1.

But Walker, 29, isn’t the first outfield player to go in goal. Here’s more who took one for the team.

In easier circumstances with his team winning 5-0, and having scored a hat-trick earlier on in the 2014 Europa League tie, Kane went in nets against Greek side Asteras Tripolis.

Hugo Lloris was sent off, and Spurs had used all their subs, so the Three Lions striker took on the responsibility for the final minutes.

But Kane only managed to keep a clean sheet for all of 30 seconds before a free kick spilled through his hands.

Stick to scoring goals, rather than keeping them out – that’s what we say.

Harry Kane with the heroics back in 2014… pic.twitter.com/mlJRe8pSAi

BT Sport panellist and Man Utd legend Rio was a top class defender in his day.

But we don’t think he ever would’ve made a goalie.

In a 2008 FA Cup quarter-final tie, Ferdinand was tasked with immediately saving a penalty at Old Trafford after Milan Baros was upended by United’s substitute keeper Tomasz Kuszczak, who had replaced Edwin Van der Saar at half-time.

Sulley Muntari lashed the ball past Ferdinand to set up a famous victory for Pompey.

There must be something about former England defenders wanting to be goalies.

Chelsea legend John Terry went in sticks in a dramatic match against Reading in 2016 that saw the Blues lose both their keepers to injuries.

First, Petr Cech was stretchered off after a clash with Stephen Hunt that famously fractured his skull.

Then, replacement Carlo Cudicini was forced off – so captain Terry put on the No1 jersey for the remaining minutes.

He only kept a clean sheet too!

But, when PSG goalie Kevin Trapp was given his marching orders in a French Cup game last season against Sochaux, the 5ft 6in defender tried his luck, or hand shall we say, at the goalie position.

Immediately, he was tasked with organising a wall to defend a free-kick and took to it with gusto, barking orders at his defenders.

And he kept a clean sheet too… for the 30 seconds he played there.

Before Vinnie was bashing people up in Lock, Stock and Two Smoking Barrels and crooning on X Factor, he was a hardman footballer.

He enjoyed his most notable years as one of the ‘Crazy Gang’ at Wimbledon, and was asked to go in goal in a 1996 Premier League match against Newcastle when Paul Heald was sent off and The Dons had used all their subs.

Jones pulled on the gloves in the 57th minute, and let in three goals as the Magpies thrashed Wimbledon 6-1.

But the former Welsh international did make a number of saves too.

That Edwin Van der Saar was always in the wars at United.

When the legendary Dutch keeper broke his nose, with United 4-0 up against Tottenham in 2007 and having used all their subs, Republic of Ireland international O’Shea went in goal.

Ferdinand initially took the jersey, only for the rest of the team to decide O’Shea would be the better bet.

And O’Shea made one brilliant save to deny his international teammate Robbie Keane, charging off his line and tackling him.

Perhaps the best performance from an outfield player forced to go between the sticks.

When Tony Coton was shown red for Man City, their towering centre forward Niall Quinn pulled on his jersey.

His immediate task was to save a Dean Saunders penalty in a 1991 First Division match.

And even though it was struck well, hard and low, Quinn leapt to his left and pushed the ball behind for a corner.

City went on to win 2-1, with Quinn scoring before he went in goal, and Derby were relegated.

Picture the scene. Sheffield United are 1-0 up against Arsenal, battling for their lives and then goalie Paddy Kenny is forced off injured with 30 minutes still left to play.

Neil Warnock, who wasn’t a fan of putting a goalie on the sub’s bench, had already earmarked Phil Jagielka for this situation before, so the big centre half pulled on the gloves.

And he had a stonker!

‘Jags’ kept the Gunners at bay, pulling off saves from Robin Van Persie and Julio Baptista to record a famous win for the Blades in 2006.

Georgia Harrison looks completely different as she has her lip fillers dissolved in very...