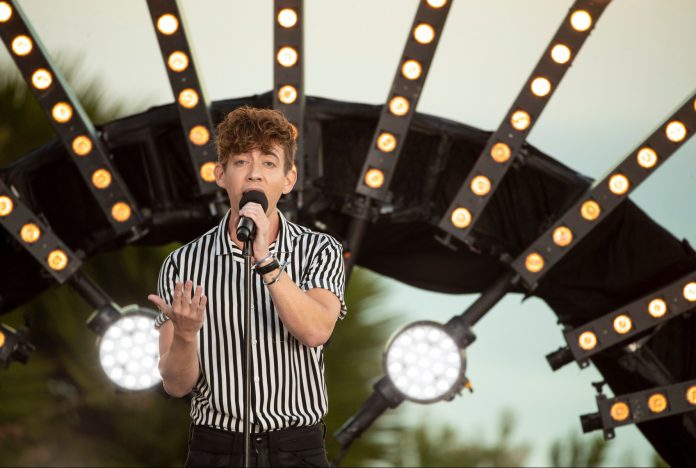 VIEWERS of The X Factor: Celebrity were left scratching their heads last night as Glee star Kevin McHale auditioned for the show – despite already having sold millions of records as part of the hit musical TV series.

Fans of the ITV reality competition questioned his inclusion on the show on twitter, especially as judge Nicole Scherzinger opened the episode claiming that the celebrities in the line-up were “not known for singing”.

Kevin, 31, who played wheelchair user Artie Abrams in the drama about a high school acapella club, even mentioned how successful he had been musically in his introductory video.

” We got to sing and dance and do ridiculous performances, ” he said .

“We got to sing and dance at the white house, we were nominated for Grammys, Golden Globes, Emmys. It was the greatest experience of my entire life.”

As Kevin took to the stage to perform Camila Cabelo’s hit Never Be The Same for judges Simon Cowell, Nicole and Louis Walsh, viewers took to twitter to question his previous experience.

I dont understand how Kevin McHale isnt known for his singing??? #XFactorCelebrity pic.twitter.com/5zmg99tQYZ

I still dont get why Kevin McHale is on celeb X Factor like we know he can sing, we watched him singing in a wheelchair for 6 years ?????

“I don’t understand how Kevin McHale isn’t know for his singing???” one asked.

“Kevin Mchale is on XFactor UK??? tf” added another.

A third said: “Im so confused about the premise of this show. Kevin McHale is a professional singer.”

And a fourth chipped i: “I still dont get why Kevin McHale is on celeb X Factor like we know he can sing, we watched him singing in a wheelchair for 6 years ?????”

For his part, Kevin seemed aware that there would be some criticism about his previous singing credentials.

“I do feel a bit of pressure because people know me from being part of a musical tv show so people will think that gives me a leg up,” he said in his VT.

“However I don’t feel that way at all. The X Factor terrifies me. ”

And the judges didn’t seem to care about his past.

After he finished his audition, the judges were full of praise.

“I love that. That is an amazing, amazing song,” Simon said. “Kevin, huge respect for doing this.”

“I’m so excited that you are,” Nicole added. “I know you are going to grow throughout this competition.”

“Really well done,” said Louis. I think we are going to see a lot more of you.”

The opening show also featured auditions from Love Island superground The Islanders, newsreader Martin Bashir and The Chase Vixen Jenny Ryan, while fan reaction claimed the show was back to its best.

Aldi shoppers queue for over an HOUR to get their hands on Kevin the...

Stay local rule binned: Brits CAN travel across the country to see friends and...

Queen ‘will scrap’ Christmas tradition after being forced to cancel festive lunch with family...