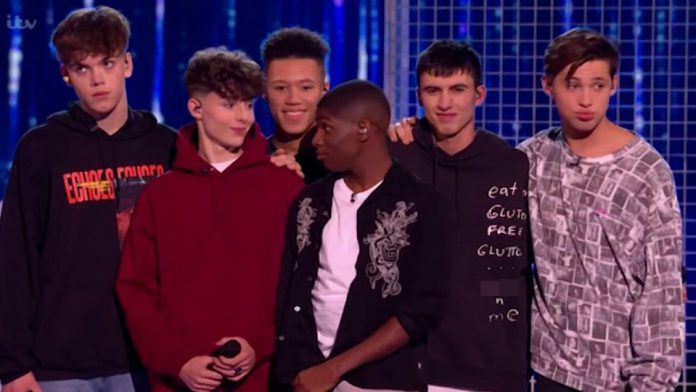 THE X Factor: The Band viewers last night spotted a major blunder during the finale when a swear word was aired on screen.

A contestant’s jumper with “s***” written on the front seemed to go unnoticed by everyone backstage.

The boyband – Unwritten Rule – were battling it out to win the show against girl group Real Like You.

But some viewers were distracted by 19-year-old Harrison Cole’s black hoodie.

One said: “Sorry but what does his hoody say? Eat Gluten Free Gluttony S*** n Me?”

Another added: “Did I imagine it or did that kid’s jumper say something about eating something gluten-free and then s***ing on him?”

Someone else said: “Nice family boy band with the s*** hoody before 9pm?”

The awkward oversight was spotted asNicole Scherzinger heaped praise on the boys.

She said: “I had the pleasure of being alongside this man right here, Simon Cowell, when we put together a little band called One Direction.

“Dare I say, I think you could rival that band.

“You have come such a long way.”

But they narrowly missed out on winning show after being beaten by Real Like You who impressed with their versions of Independent Woman, Destiny’s Child and Demi Lovato’s Sorry not Sorry.

They also performed an original performance of band member Kellimarie’s song, Be Like Them.

After they were announced as champions, singer Seorsia Leagh Jack told the show’s host Dermot O’Leary: “Oh my god! I’m so overwhelmed by happiness right now.”

They walked away with a recording contract after being put together over the course of the week, with Ella Eyre, Fred Ball, Lil Eddie and Naughty Boy helping to pick the band.

Nicole told them: said: “You’re so strong and confident up there. Seriously all of you girls add something so completely different to the group.

Molly-Mae reveals her meal plan as she goes on a ‘health kick’ after getting...

Who is Perri Kiely? Diversity dancer and Dancing On Ice celebrity contestant