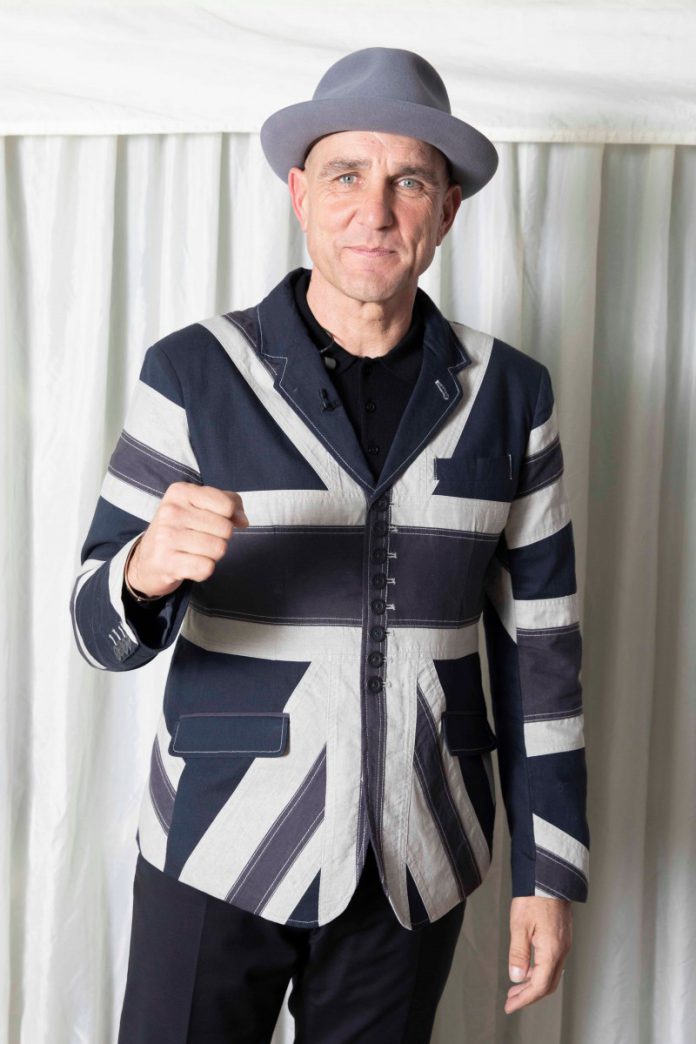 ITS been emotional watching Vinnie Jones over the past few weeks.

The Lock, Stock and Two Smoking Barrels star has been competing on The X Factor: Celebrity in tribute to his wife Tanya who lost her battle with cancer in July aged just 53.

In doing so, hes become an inspiration for widowers dealing with the grief of losing a partner.

And according to Vinnie, hes done it all with his beloved wife of 25 years by his side.

Speaking exclusively to HOAR, the 54-year-old said: I talk to her all of the time. Constantly, every day.

We have a little chat when Im making my bed. This morning I went there you go babe, look and it wasnt my best bed making, so I re-did it.

Tanya passed away at the family home in Los Angeles after Vinnie refused to move her into a hospice.

She was diagnosed with melanoma, the most serious skin cancer, in 2013. It was an illness Vinnie also battled but while he was given the all-clear, Tanya was not.

She had also been treated twice for cervical cancer and underwent a heart transplant at 21 after the birth of daughter Kayley.

Vinnie has sold the house since her death saying it would be too heartbreaking to stay without her, surrounded by memories.

But he has bought the property next door, where Kayley, 32, Tanyas daughter from her relationship with ex-husband Steve Terry currently lives.

Vinnie tells how the impact of Tanyas death hasnt just affected him, Kayley and their son Aaron, 28, whos training to be a pilot in Ireland.

Kayley phoned me at 3am to tell me. That dog never left her side. He was about ten. He had a lot of cancers, liver failure and everything else.

After she passed Vinnie sold the house they once shared, but he bought the property next door where Tanya’s daughter Kayley now lives

“But we take a positive view hes with Tanya now. Its incredible how he died so close to her.

Vinnie, who discovered his spiritual side following the death of his grandfather when he was 18, says Tanya and Gypsy had a spiritual bond.

He adds: They were that close and he was with her when she passed.

Vinnie has been inundated with messages from fellow widowers thanking him for helping them seek new ways to deal with their grief.

The former hardman says the loss of his beloved wife didn’t just affect him, Kayley and their son Aaron – it also hit her devoted dog Gypsy

His message of advice is both simple and poignant and its all about making the bed.

Vinnie says: Whichever way your day goes, no matter how heavy the grief is when you go to bed, you have a nice clean one to get into and you start again. And thats what I do every day.

I had one guy on Tuesday who said: Youve inspired me. I wake up and make my bed every morning.

Vinnies transformation from football hardman to national treasure is extraordinary.

By speaking about his grief, Vinnie hopes to help others who have lost their partner

This is a man who was sent off a record 12 times and was fined 20,000 by the FA in 1992 for giving tips on how to injure players while providing commentary for an infamous video called Soccers Hard Men.

The image of him grabbing Paul Gascoignes crotch while snarling with menace remains one of the most iconic pictures in English football history.

But he also had a lot of success, making over 400 appearances during his 15-year career. One of the many highlights was a shock FA Cup win with Wimbledon against Liverpool.

So does he have unfinished business in football? If a certain Portuguese manager with a new job comes calling, that would definitely be the case.

Vinnie says: Im in my fifties now and I want to need to have the reins of my life. I dont want to be trying to catch a lift. I want to be my own boss.

But if Jose Mourinho called me up and said Vinnie, can you be my No2 at Spurs because I want team spirit, it would be something I would consider.

Asked if he gets offers to return to the game, he adds: Listen mate, the way my phone goes, dont be surprised at anything. Its just crazy, from one thing to the next.

But he accepts the changing room has changed since his antics at Wimbledon where the players were dubbed The Crazy Gang.

He says: I went into the Liverpool dressing room a few years ago, before Steven Gerrard retired, and they all had headphones on.

“Not one of them were talking and Stevie was having a rub. I said whats going on? and he said thats it now mate thats how it is. I couldnt have that now as a manager.

However, if the X Factor: Celebrity goes his way the music world could come beckoning.

Hes currently one of the favourites to win after impressing voters as well as head judge Simon Cowell.

The actor has since admitted it was a mistake, saying ‘I forgot the charities Im doing this for, Tanyas two charities’

Tanya encouraged him to accept Simons offer of a place on the show before her death, as she had been a huge fan of the long-running ITV series.

And after the drama of last Saturdays quarter final show, in which he offered to step down and allow axed rival Kevin McHale from US TV series Glee to remain in the competition at his expense, he is now desperate to win it.

He jokes: Vin to win! I lost the plot a little bit last week and I forgot the charities Im doing this for Tanyas two charities.

In hindsight I shouldnt have done it and I thank Simon for keeping me in.

And does he think Tanya would have believed he could reach the semi-finals? He says: Whatever I do, shell think I can win it.

“But I need to win this for the charities. That would be the icing on the cake.

And that would be emotional.

And he has his sights set on winning, saying he needs to do it for his chosen charities

Giant avocados which are almost as heavy as two bags of sugar available at...

Michael Gove sparks fury after hinting £100bn budget for HS2 could be slashed to...