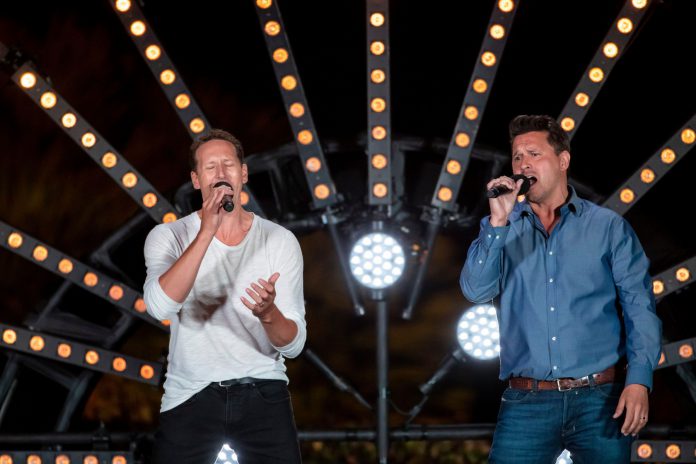 The former Hollyoaks star and ex Strictly Come Dancing pro teamed up to sing together under the duo Cole and Edwards – but it didn’t quite go to plan.

And Jeremy was left furious after a disappointing reaction from Simon, 59, and his music industry pals.

In the first episode of the new talent show series, Jeremy brands them “mean” when he comes off stage after they channel chart toppers Robson & Jerome with a romantic duet.

America’s Got Talent judge Howie is in the audience and gives scathing feedback, with Jeremy, 48, telling Sun Online afterwards: “This was just me, I cant speak for Brendan on this.Brendan is more used to it than I am.

“They edited down quite a lot of what Howie said and Im going to be completely honest with you, I dont think a lot of it was necessary.

Jeremy then raged: “At one point I wanted to say, dude, youre not even a judge so can you shut up. It only matters what these three say.”

Meanwhile, Brendan wasn’t so put off by their comments and said the experience of singing in Simon’s back garden in Malibu was “incredible”.

After watching the first episode back, he said: “It was actually kind of clarifying because nobody knew what was going to be put out on the show.

“We were all there, its a hell of an experience and theyve put together this incredible show and I was proud watching it.

“You cringe at your own stuff obviously, but as a whole youre proud of everybody because everyone has put together a really great show.

“The production team have obviously done a great job and here we are. I think its going to be good Saturday night television.”

Singing duo Cole and Edwards, aka Brendan Cole and Jeremy Edwards, will harmonise their hearts out on X Factor: Celebrity

A string of famous faces with hidden singing talents are set to battle it out for a record deal when the show kicks off tomorrow night.

Stars from The Chase,Love Island, Towie, and EastEnders are all vying for a new career as chart topping artists.

Wes Nelson, Samira Mighty, Eyal Booker, and Zara McDermott have even formed a pop band and were a standout act from the X Factor: Celebrity auditions.

They are set to compete against Towie legend Megan McKenna.

Speaking about his huge shake up, Simon told Sun Online: “The time feels right, and it will be a huge change. I think its going to be huge, its the best Ive felt about this show in years.’”

The X Factor: Celebrity begins on Saturday, October 12th at 8.35pm on ITV.

Dr Alex George spends his first Christmas without his brother Llŷr at A&E after...