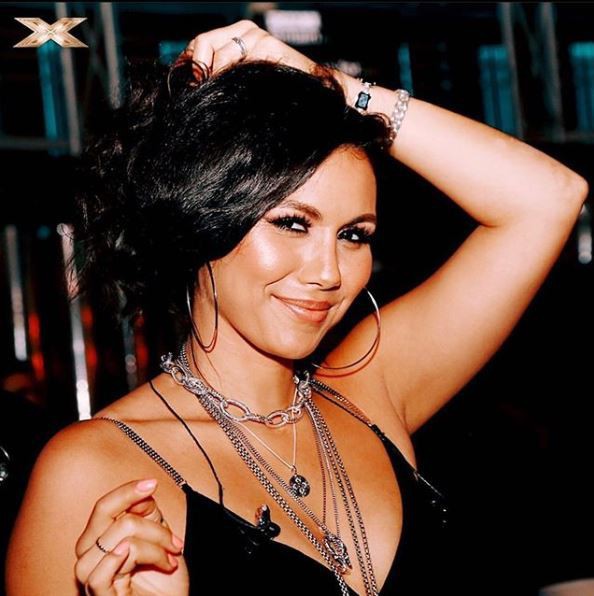 THE X Factor Celebrity’s Olivia Olson was the first to be booted off the live shows – and took aim at judge Simon Cowell for dealing her a “punch in the gut.”

The actress, who found fame on slushy festive movie Love Actually, was sent home over journalist Martin Bashir in a surprise outcome on Saturday’s ITV show.

Olivia was left in floods of tears at the outcome, and in a message posted today on her Instagram page, she hinted “confusing” comments from the head judge had played their part in her “shock”.

She uploaded a cute image showing her pulling back her and flashing a grin to the camera as she vowed: “Ill keep smiling.”

The American singer hinted in her caption she felt Simon’s comments on the night were unfair, and continued: “I knew going into @thexfactor anything could happen and the level of talent was so high this year!

“Im grateful for the opportunity as it has completely pushed me out of my comfort zone, reminding myself I love to be up on that stage.

“That being said, yes my elimination came as a shock. I was confused why Simon would tell me I could win this thing and then ultimately send me home.

“It was a punch in the gut. People have emotions and mine got the best of me…because I REALLY wanted this.

“Im proud of my performance last night and thats what matters to me. Good luck to all my new friends Ive made along the way. OO out!”

Her fans were quick to stick up for her in the comments, with one bluntly stating she was “robbed” of victory.

Another stated: “Simon and all the judges of the televised talent shows have such cliched speech at this point.

“They like what they hear and will tell you it’s the best thing they’ve ever heard, and then they say it for the next performance too.”

On the night, she belted out the Dionne Warwick hit, Anyone Who Had A Heart, before she was evicted with chat show host, Ricki Lake.

Turning to Olivia after the outcome, presenter Dermot O’Leary saw her crying and remarked: Come on. Hold this together. How are we doing?

Dermot tried to calm the singer down as he added: With you though, you know, you’ve come over here. You have been embraced by this audience.

He then hugged Olivia and said: Try and use this as a springboard and continue doing what you’re doing.

She had previously told how she was about a “lot more” than her Love Actually role as Joanna Anderson in the 2003 flick, for which she has found worldwide fame.

EastEnders legend June Brown can no longer watch soap because of her ‘failing eye...