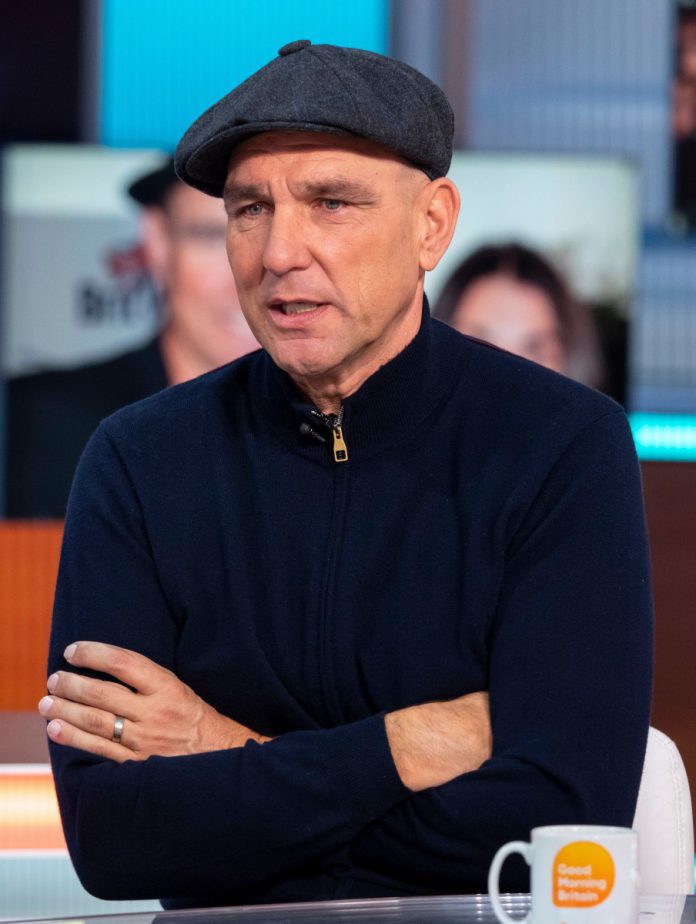 The 66-year-old contacted Vinnie to wish him luck ahead of his appearance on the ITV show.

In a recording given to the Sun on Sunday, Charlie – first jailed in 1974 for armed robbery – hilariously describes the ex-Wales defender as “not a great footballer… but a hard one.”

The moustached jailbird – the UKs most violent – also praised teetotal Vinnie on his recent Good Morning Britain interview, in which he discussed the tragic death of his beloved wife, Tanya.

Calling from Frankland prison in County Durham, Charlie – who now goes by surname Salvador, after the artist – says: “Respect to you mate; youre a good man. The best.

“I say to the lads I dont think you was ever a great footballer but you was a hard footballer. [sic]

The convicted con sent Vinnie a video message, wishing him luck on X Factor: Celebrity before inviting him to his ‘freedom party’

“And you played with your heart. You put everything into it mate. ‘Ere respect to you.

“Now listen. Im hoping to get out in a couple of years; I want you to come to my freedom party.

“Now I know you dont drink no more, you ain’t had a drop for a few years now. [But] you and me mate, well sit in a corner with a pot of tea mate and have a chat. Hows that?”

Charlie, who was moved to Broadmoor in 1978 after attempting to strangle child killer John White and later staged several rooftop protests, has repeatedly beaten up his fellow inmates and guards.

Charlie, who now insists he is a reformed man and hopes to be released in 2021, admitted he had been moved watching Vinnie’s TV interview earlier this month.

In it, the popular star, who won nine caps for Wales, spoke movingly about Tanya who died in July following a long illness.

He added: “Vinnie I seen you on Piers Morgan – absolute unbelievable.

“Honestly the way you come across, youre a proper geezer. Its tough for you. Youve lost a bloody diamond of your life.

“But the way you put it over really touched me mate. I thought fucking brilliant. It (will) get easier with time. No doubt.

“I was sitting here, I thought blimey, from hod carrier to Hollywood, marrying that beautiful, beautiful lady. You was a good husband. She was a good wife. Be strong mate.”

Tonight Vinnie, who won over fans with his X Factor debut, took to Twitter (@VinnieJones65) to share the message with his 130,000 fans.

Vinnie won over fans with his debut X Factor performance

And today he told the Sun on Sunday: “Hearing that message was quite surreal – what a character he is.

“Let’s hope Charlie and his mates have phones on the inside so they can pick up the phone and vote for me!

“And be careful, judges – I’ve got friends on the inside…!”

Vinnie also joked ‘let’s hope Charlie and his mates have phones on the inside so they can pick up the phone and vote for me!’

Dani Dyer names her baby son Santiago after ruling out naming him Daniel after...

Stacey Solomon reveals Joe Swash is sick and confined to his bed with a...