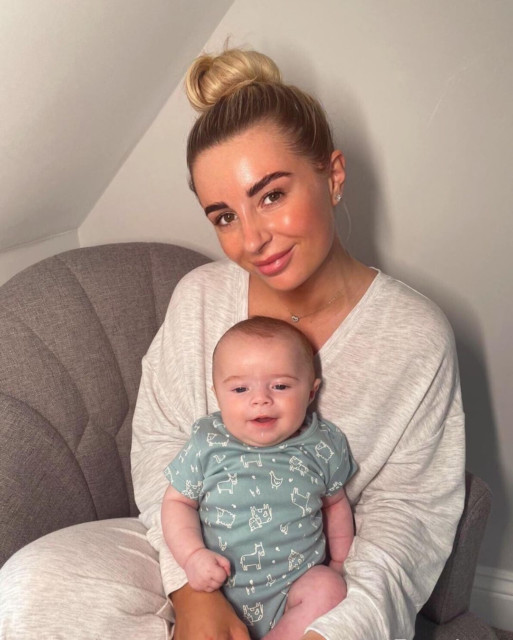 The Love Island star, who welcomed baby Santiago with Sammy in January, said that she would like to have her second child when her son turns two.

Dani Dyer revealed that she wants a second baby soonDani’s boyfriend Sammy Kimmence was sent to prison for conning OAPs out of £34,000

Dani, 24, opened up about her plans to extend her family before Sammy was was sentenced to 3½ years for conning OAPs out of £34,000.

Dani was quizzed by fans on her YouTube channel, asking when she plans on having her next baby.

Dani also admitted that she “doesn’t want to rush it” as she enjoys being a first time mum to baby Santiago.

She continued: “I don’t feel like you can plan these things. I feel like when I’m ready.

“I don’t want to rush it…people who have babies like two under one. I reckon it’s amazing when they’re older because they’re best friends.

“But that must be difficult. But I feel like you can’t plan.

“I’m literally just loving being Santi’s mummy at the minute and I’m enjoying just him growing up and I really want to just cherish these moments and not rush it.”

It was revealed that Dani had dumped her jailbird boyfriend after he hoodwinked her over his crimes.

The lowlife convinced former Love Island winner Dani that his crimes were “not that serious” and he was only facing a suspended sentence.

After learning the truth, she ended their relationship and is focusing on life as a single parent.

A source said: “Sammy led Dani to believe he hadn’t done anything too serious and that he would get a suspended sentence.

“Now she knows the full horror of what he did.

“She is broken, she feels desperately sorry for the two men he scammed and whose lives he ruined.

“Dani feels utterly stupid for ever believing Sammy and is totally overwhelmed.”

He persuaded them to let him “invest” their savings for them. But he splashed out on clothes, restaurants, nightclubs and Ibiza hotels.

Kimmence, of Rayleigh, Essex, initially denied the charges but pleaded guilty to five frauds and was jailed at Portsmouth crown court on Wednesday. Did you miss our previous article…
https://www.hellofaread.com/love-island/tommy-fury-shows-off-new-120k-supercar-to-molly-mae-hague-just-weeks-after-passing-his-test/

Meghan Markle and Prince Harry net worth: How much are the Duke and Duchess...

Queen WILL appoint either Liz Truss or Rishi Sunak as the next PM at...