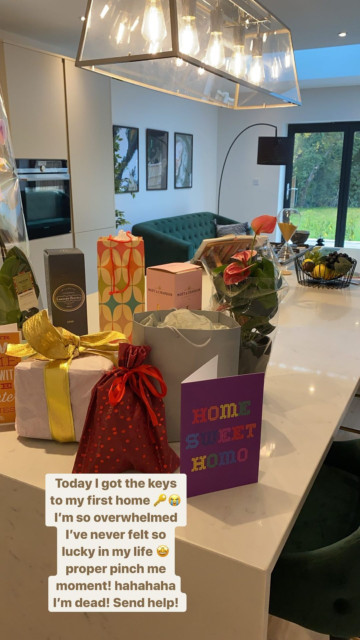 MEGAN Barton Hanson showed off her incredible London flat with a chic balcony and quirky décor after buying her first home.

The 26-year-old reality star gave fans a glimpse of her trendy new pad complete with colourful furniture and vibrant art.

The Love Island beauty appeared thrilled to be an official homeowner as she showed off her swanky kitchen and living room.

Megan shared a photo of her stunning kitchen that boasts an electronic glass splash-back for her cooker and all the modern essentials like a wine fridge.

The star wrote alongside a photo of housewarming gifts and cards: “Today I got the keys to my first home. I’ve never felt so lucky in my life, proper pinch me moment.”

Megan can enjoy evenings hosting and entertaining her pals with around her massive kitchen island complete with green velvet stools. The reality star have opted for green and zebra print décor She can also enjoy dining at her trendy dinner table with six padded seats.

Megan can spend hours cooking up a storm in her modern kitchen despite joking that she can “only cook pot noodles and a fried egg”.

She can enjoy evenings unwinding on her velvet emerald coloured sofa accessorised with matching zebra print cushions and a rug. Megan can also soak up the sunshine during the summer on her lavish balcony.

The Love Island star has already put her stamp on the place with quirky art and a corner dedicated to plants with some in a pedestal plant stand.

The cheeky star posed totally nude apart from a pair of towering heels and sliver body paint in saucy snaps shared on Instagram. Megan can lap up the sunshine on her impressive balcony

She has proudly showed off her enviable body that she slathered with oil for the bewitching shoot.

The shoot comes after Megan, who has a new sex and mental health podcast You Come First, told HOAR how she likes to take control in the bedroom and can be “quite demanding and dominant”.

Influencer Megan said she did not get the fuss about sex at first — and actually got more stimulation from horse riding.

The star, who has partnered with upmarket sex toy firm LELO, also described her young self as “painfully shy”. The star has a corner for her plants

Megan, a former stripper who grew up in Southend, Essex, said she was “peer pressured” into her first kiss.

She says: “It happened really naturally with a videographer I was shooting with. “But I fancied this girl more than her boyfriend. He was an added bonus. Instead of using a toy, we had a real-life man there!”

Megan — who is in the top ten of celebrity earners on X-rated website OnlyFans by sending bikini pictures to subscribers — is single.

“Now I feel like I don’t need anyone. I’m in the process of buying my first house. “If someone came into my life I’d give them a chance, but too many women get into a panic — and that’s when you settle for someone who isn’t right.”

Love Island’s Shaughna hints at romance with Jack Fincham – and begs I’m A...

I slashed my energy bill by £100 a month with simple boiler tricks –...