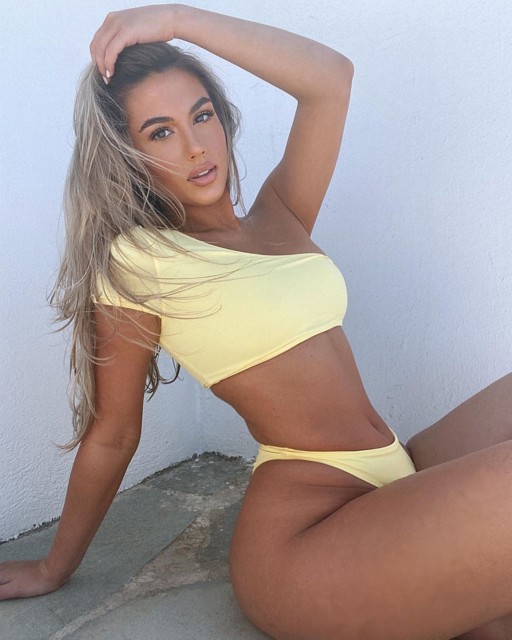 KARREN Brady’s daughter looks sun-kissed as she shows off her incredible figure in yellow bikini from Mykonos.

In a promoted post for online clothing brand PrettyLittleThing, Sophia Peschisolido posed in the £9 lemon swimsuit after jetting off on holiday.

The 22-year-old recently ruled out appearing on ITV’s Love Island when it returns next summer.

Sophie revealed she’s been asked loads of times to be one of the contestants but always turns the opportunity down, stating: “I just don’t want that kind of attention.”

Sophia, whose father is ex-footballer Paul Peschisolido, currently works as an influencer and can often be seen modelling bikinis and revealing outfits from her home in Chelsea, London.

She has 142,000 followers since launching as a social media star and following in the footsteps of her famous parents. Sophia lives with them in their £6.4million home with white marble fireplace and stocked bar.

Throughout lockdown, Sophia has been posing from stunning rooms within their London home to update her Instagram page.

Now she’s headed to Mykonos to enjoy the sun as lockdown restrictions began to ease. Showing off her peachy bum in gym outfits Sophia is Karren’s only daughter

Sun on Sunday columnist Karren – best known for her role by Lord Alan Sugar’s side on The Apprentic.

She also has a son, Paolo, 21, with her husband, Canadian football manager, Paul Peschisolido, 48, who she married in 1995.

GTA 6 release date leaked and may be out in time for PS5...

The Masked Singer winner Joss Stone makes £500,000 a YEAR through music – despite...