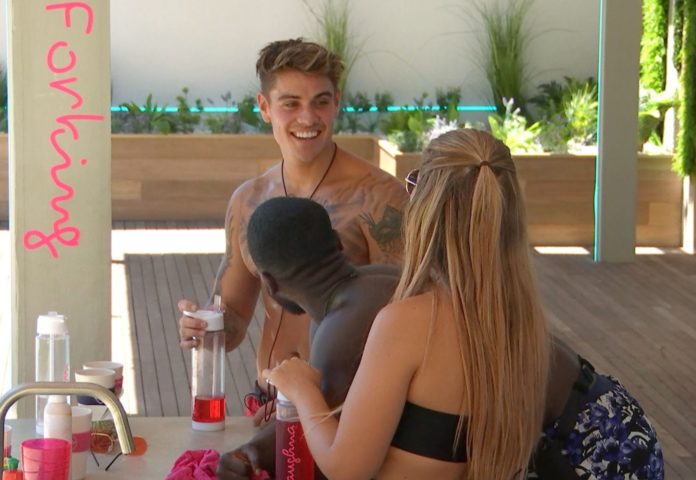 The 25-year-old dropped a bombshell when she told the other islanders she has feelings for the popular heating engineer.

Viewers were left baffled over Shaughna’s feelings for Luke M and claimed they are staged, especially with the final looming.

One person said: “I have a theory that the producers told shaughna she should pursue something with Luke lol cos its so random #LoveIsland.”

Another user wrote: “The fact that Shaughna told MIKE about her feelings for Luke M before Paige is so suspect. Smells of producer meddling if you ask me #LoveIsland.”

Another follower commented: “The shaughna and luke m thing sees a bit planned by the producers #LoveIsland.”

A Love Island spokeswoman said: “The opinions the Islanders have, decisions they make and the relationships formed are completely within the control of the Islanders themselves.”

The fact that Shaughna told MIKE about her feelings for Luke M before Paige is so suspect. Smells of producer meddling if you ask me #LoveIsland

This Shaughna and Luke M thing is so staged

Producers, do you think we are stupid? #LoveIsland

The producers want Luke M and Shaughna to win it all

Fans think the revelation from the democratic services officer has come completely out of the blue, as the pair have rarely been seen spending time together.

Shaughna told her best pal Paige: When things didnt work out with Natalia, I was a little bit like, yessss”

The 22-year-old Scot dished on the shocking statement in the beach hut, saying: “Maybe when you put all the pieces together, Im shocked Ive not seen it before. Every time he walks by, Shaughna drops him comments, every time hes there, they flirt. She married him in the Snog, Marry Pie game”.

She added: “Maybe the signs have been there and weve just never asked the question. So itll be interesting to see how this pans out.

Fans have fallen in love with Shaughna during the series, as her wit and willingness to say things as they are has endeared her to viewers.

She was initially coupled up with scaffolder Callum and the pair looked like one of the strongest couples in the villa, before the 23-year-old tragically dumped her for Casa Amor bombshell Molly.

She soon found herself having a one-to-one chat with the 25-year-old model, which gave both girls a chance to get all their feelings out in the open.

Whilst it has been difficult for the South Londoner to see Callum and Molly cosying up to one another in the villa, Shaughna has now set her sights on the man from Redcar.

Luke M is famously unlucky in love despite looking like Justin Bieber and so far Love Island has done little to change his fortunes.

Things did not work out with Jess, after she ditched him in favour of Mike and his current coupling with Natalia ended pretty swiftly too.

He has shown interest in Demi and things were going well between the two, until the 21-year-old decided she still wants to get to know 28-year-old new boy Jamie.

However, she bizarrely locked with lips with Luke straight after, leaving him completely confused.

Im A Celebs Jacqueline Jossa and Myles Stephenson strip off as campmates sunbathe and...