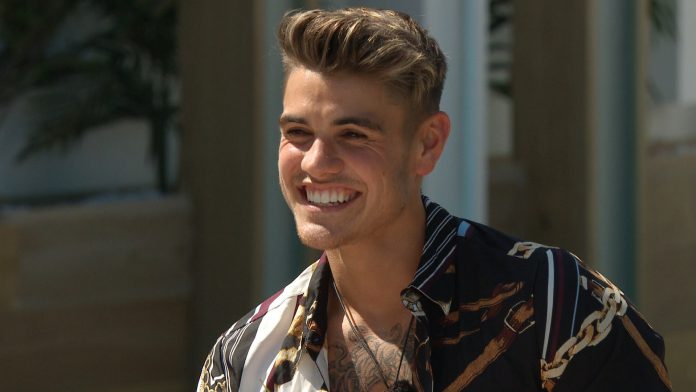 On tonight’s show the new boys both get the chance to better get to know two girls of their choice.

Luke M says he’s not worried about stepping on toes, telling the Beach Hut: No one is married off in here, its been a couple of weeks, Im going to get to know them, see where it leads and yeah, see if I can find something.

He picks Paige, while the other Luke opts for Leanne, much to Mike’s annoyance.

There’s an awkward exchange when Mike, who is sat next to Leanne, questions if Luke Ts asking him for permission to date her.

The self-assured newbie asks: Im going to choose Leanne because I havent spoken to you and want to get to know you if thats cool.

Footballer Finn is concerned for his future with Paige after she became angry with him in last night’s show.

Finn admits in the Beach Hut: Me and Mike are certainly on edge and hoping the girls return and say the dates went horribly wrong. Thatd be the ideal scenario.

And it looks like Finn should be worried as at the end of their date Paige tells Luke M: Youve left me intrigued.

Returning to the Beach Hut Paige admits: We have a predicament.

Last night Paige started a screaming row with Finn – because he didn’t sit next to her.

Boggling in disbelief at the argument, the 20-year-old footballer told her: “I don’t think it’s that reason. In fact, I know it’s not that reason.”

And fans agreed with him, saying she only sparked the fight because she wants to hook up with Luke M.

One wrote: “Paige is defo making Finley feel like hes done something wrong so she doesnt feel as bad when she gets to know the new guys.”

Another insisted: “Paige is only acting up cause she wants to get with Justin btec Bieber.”

A third agreed, writing: “Paige starting an argument so she re-couple with a new one.”

Others thought she was simply scrabbling for airtime on Love Island, with one writing: “Paige is making up drama so she can get more screen time looooooool what is this.”

Paige appeared to take huge offence to Finn not sitting next to her while many of the other couples were beside their partners.

The 22-year-old singer complained: “Me and you were sitting at opposite sides of the fire pit after I’ve just told the boys: ‘It’s going good.’

“It was the height of immaturity in my eyes. You couldn’t even look me in the eyes when usually you can’t take your eyes off me.”

He and Luke Trotman joined the villa as bombshells last night

When he protested that was how he normally is, she yelled: “F*** off then. That’s not how you are. You come to me all the time. That was muggy.

She then got up and walked away, saying: “I cannot be a**ed with this conversation. This just shows your age. It’s f***ing muggy.”

The two new Lukes shook up the villa last night when they arrived – leaving some of the lads, including Callum Jones and Connor Durman, looking thoroughly unimpressed.

What kind of doctor is Dr Alex from Love Island?

Who is Dancing On Ice pro Hamish Gaman and is he married?

Tory MP caught on camera with his pants down after exposing himself in a...