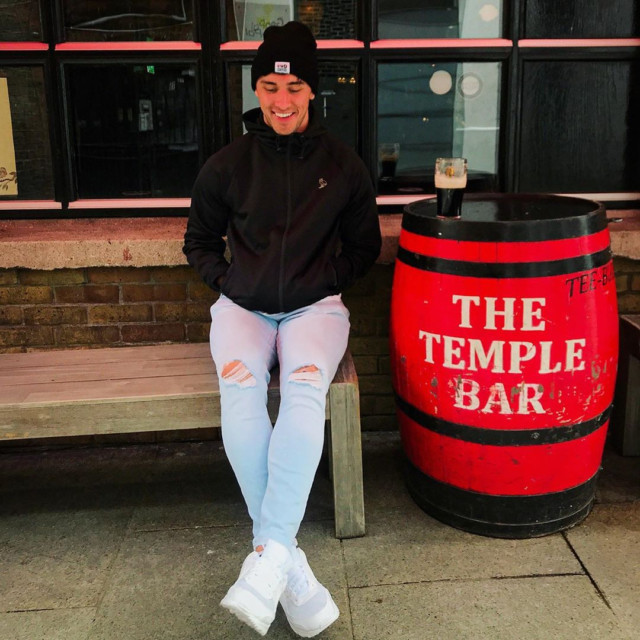 Greg took to Instagram to commemorate one year to the day since he arrived at the infamous villa.

He posted a poem describing his experience, alongside a photo of himself in ripped jeans, white sneakers and black beanie.

Smiling at the ground as he sat outside The Temple Bar with a pint of Guinness.

He wrote: “Exactly 1 year since I entered Love Island! “It’s difficult to express in a caption how the experience has been.
“I do however want to thank you for following me on my journey so far, your support means more to me than you’ll ever know.

“In return for your kindness, I wrote a short poem for you. I hope [you] enjoy it!”

In the poem, Greg described feeling “nostalgically content” but revealed it had not all been smooth sailing. He wrote: “Although shunned and abused/For pursuing my dreams/Known only to few/The truth behind the scenes.”

Greg finished by saying he hoped the “future is kind” but he was “happy with where I at present”.

The rugby player dumped Amber via text just five weeks after they won the ITV series.

They won the public over on the show after being together for only 12 days, but they never made their relationship official in the outside world. Amber made no secret that she missed Greg in both her own social media captions and in the comments of his posts.
Greg returned to rugby training and announced on Instagram that he had become a Youth Ambassador for Bank of Ireland.

He blamed their busy schedules on the reason for breaking up.

Speaking on RTE One’s Late Late Show last year he said: “We’re mad about each other, what’s not to be mad about? The pair were shock winners of the 2019 summer season “She’s gorgeous, smart funny, she’s the Queen of Love Island for a reason but you need to be realistic about the situation.

“She lives in the UK, every brand wants to work with her, every event wants her there, of course she deserves all of it and I decided to come back to Ireland and do my thing here.”
He continued: “I’m trying to get to the Olympics with the sevens team, I’ve got my law exams coming up so we’re both so jam-packed busy and you need to take these opportunities by the scruff of the neck.

“So we’re kind of just being realistic about the situation and protecting our careers and that’s where we are at the moment.”