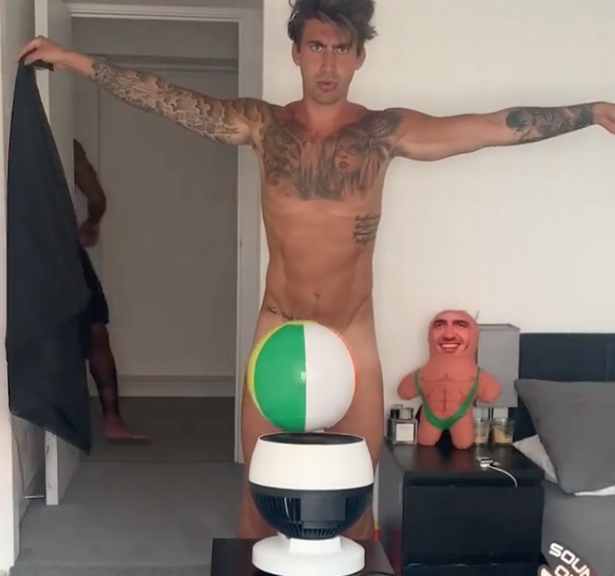 LOVE Island’s Chris Taylor sent his followers into a frenzy on Instagram yesterday after he shared a cheeky video of him in the nude.

The 29-year-old was emulating Britain’s Got Talent star Mr Uekusa in the clip and stood completely starkers as he covered his modesty with a floating beach all.

Recreating the magic trick, Chris used the ball to cover his manhood while a fan lifted the ball in the air and he pulled a table cloth from underneath it, which risked exposing everything.

Yet, the hilarity didn’t end there as the reality star, who found fame on series five of the ITV2 dating show, filmed his cheeky clip his Love Island co-star Michael Griffiths walked in on him.

Unaware that Chris had ditched his clothes for the comedy clip, Michael quickly turned on his heels and walked away in disbelief.

Bringing some much needed comic relief, Chris shared the video with his 903,000 Instagram followers and captioned it: “MUST SHUT DOOR…WHEN DOING WEIRD S***. His roommate Michael Griffiths hilariously walked in on him Adding: “Hats off to @uespiiiii this kinda shiz is well harder than it looks. And I understand the concentration face at the end now.

The clip left Chris’ followers in hysterics in the comments of the video over the hilarious turn of events.

One posted: “This had me cracking up @mac_griffiths_ face”.

“It’s never boring in you house,” another penned. “Michael’s face killed me”

Roommate Michael hilariously commented: “Please learn to close your door going to have to wash my eyes out.”

Fortnite down for update v19.10: Here’s exactly when fan favourite Tilted Towers is back

Prince Harry is ‘trying to keep up’ with Meghan Markle after scoring new gigs,...