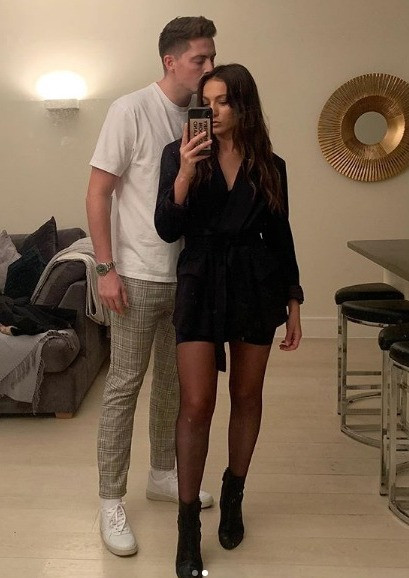 LOVE Island’s Dr Alex has revealed it’s been two months he’s been apart from his girlfriend Amelia Bath in an emotional Instagram post.

The 30-year-old is currently fighting coronavirus on the front line at an A&E department of a South London hospital.

The NHS doctor has been treating patients who are being admitted with the deadly virus which has killed nearly 34,000 people in the UK to date.

Alex and his girlfriend Amelia, who met in a bar in December 2018, decided to live separate from one another during lockdown so he could avoid infecting her.

Posting two throwback photos of them to Instagram, Alex captioned them: “Nearly 2 months apart, miss being at home together.”

Speaking on his YouTube channel recently, the former Love Island star admitted: “One of the challenges is that I am away from my girlfriend, I made the decision that I didn’t want to risk giving it to her or her family, so I am up in London staying on my own – isolating and she is staying elsewhere so I don’t give it to her. Looking forward to getting our Sundays back AB

“That is difficult when you have a busy shift like today you want to go home and sit and chat with someone and just hang out with someone to relax after what happened, it’s hard when you can’t and you are on your own.”

The Love Island star recently appeared on Lorraine to shine a light on the mental toll fighting the pandemic has had on NHS staff, and told viewers that he goes home in tears some nights.

But while he revealed his own mental health battle, he credited his “amazing” girlfriend Amelia for listening to his problems.

He told Lorraine: “There have been some difficult times. There’s been days where I’ve been coming home very upset and in tears at the things I’ve seen.

“That’s being completely honest. I’m quite open to speak to my colleagues at work. We’ve got a wellness room, which actually we can kind of go to if things get a bit difficult. I have a little bit time alone. Or speak to a colleague or a friend and go through what you’re experiencing.

What is Rishi Sunak’s net worth?

EastEnders fans fear Mick and Linda will split as he dodges sex by pretending...

Ex-Corrie star whose mum was arrested for trying to remove gran, 97, from care...